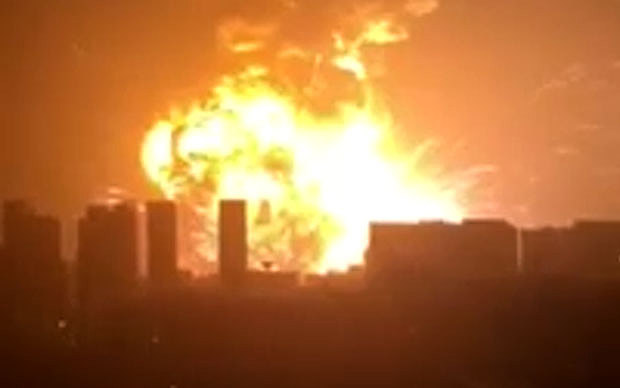 The extent of the damage and the cause of the massive explosion at a hazardous goods warehouse in the port area of Binhai outside of Tianjin at 11:30 pm Wednesday were still being evaluated as morning broke in China. From Steven Jiang, Dana Ford and Jethro Mullen at CNN :

The state-run news agency Xinhua reported that an explosion tore through a warehouse storing “dangerous and chemical goods” in Binhai, an area of the city by the water.

The firefighting division of the Chinese Public Security Ministry said firefighters were first called to the scene about a fire. An explosion went off after they arrived, it said.

As smoke continued to billow into the sky from the site Thursday, local authorities suspended firefighting efforts at the scene because of a lack of information on the “dangerous goods” that were stored at the warehouse, Xinhua reported.

[…] The state-run China Earthquake Networks Center said in an official post on social media that two of the explosions had carried the force of small earthquakes. The first was measured at magnitude of 2.3, the second at 2.9, it said. [Source]

Follow liveblogs from The Guardian and Hong Kong Free Press for live updates.

Terrifying video out of #Tianjin https://t.co/sjG5itlr1z

Witness describes Tianjin, China, port explosion: "It was like what we were told a nuclear bomb would be": http://t.co/lYgWPGftQD

Aerial view of the explosion site on 11 a.m. in Tianjin#Tianjin pic.twitter.com/Qbf2sNDiPM

This may be the most retweeted Weibo posting as of now pic.twitter.com/3lwCkbzl9b

(At the time of posting, the cartoon had been reposted almost 675,000 times on Weibo.)

Foreign journalists who approached a hospital to report were pushed back and verbally assaulted by relatives of victims and other local residents. Will Ripley of CNN was broadcasting live on CNN when he was interrupted and forced off air by distraught survivors.

Don't think it's a stretch to think this is related to Global Times and other media demonizing Western reporters all the time.

A top comment on Weibo re: #TianjinBlast from CCTV ast. director: "希望大家不信谣、不传谣，等待官方消息。" That is, "we'll take care of recording history."

Migrant workers living and working in nearby sites make up a disproportionate number of the injured and killed, according to eyewitness accounts. AFP reports:

[..A]longside the pristine new buildings that epitomise China’s rise sat twisted metal, torn off roofs and burnt out huts – remnants of the flimsy metal structures that house workers, and looked instead like crumpled, discarded sweet wrappers.

Brightly coloured bedding was exposed to the morning sun, some stained with splatters of blood.

Construction worker Wang He lived in one of the dormitories, less than a kilometre from the blast, and awoke with a jolt, hitting his head on the ceiling.

“I saw a huge fireball, felt a hot wind on my face and then heard one of the loudest sounds in my life,” the 26-year-old told AFP. [Source]

Fears for safety of up to 300 construction workers lodged next to the Tianjin blast site 天津爆炸点附近一处工地300名工人全部被埋 http://t.co/wPd72UGTeI

Two workers injured in Tianjin explosion when blgd collapsed on them. 2000 workers were in building with them. pic.twitter.com/y16IBxor3P

Journalists from Thepaper.cn report that the air at the blast site is toxic and caused them to start vomiting https://t.co/XaDIz5AjQk

More footage of the explosion from various perspectives:

Leadership Maneuvers From Tianjin to Wukan