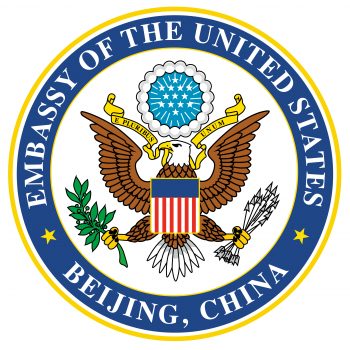 At around 1pm on Thursday, an explosive device was detonated outside the U.S. embassy in Beijing. The Washington Post’s Danielle Paquette and Emily Rauhala report:

As the crowd scattered, police quickly apprehended the suspect, whom they identified as a man from Inner Mongolia with the last name Jiang. The blast hurt his hand, authorities said.

[…] But less than an hour later, the scene was largely clear and the embassy was again open for business. More than a hundred people stood outside, some unaware that a bomber had recently ignited a device less than 100 meters away.

Only a trail of blood remained on the sidewalk. Onlookers crouched around the droplets, snapping photos on their phones.

As rumors swirled Thursday, the Global Times, a Communist Party-controlled newspaper, reported there had been an attempted self-immolation at the same spot at 11:00 a.m., briefly creating confusion about what took place. It is unclear whether that incident occurred. Local police have not commented. [Source]

Due to the location of the blast, journalists were able to reach the scene within minutes, and witness on-the-ground information control and containment efforts including attempted police intimidation, the apparent detention of a woman who shared images with reporters, and the ad hoc recruitment of cleaners from a nearby compound. Others, meanwhile, watched online as the initial burst of social media activity around the explosion was quickly stifled. (According to China Media Project, which compiled some of the deleted Weibo posts, “a search on Weibo for ’embassy’ (大使馆) now turns up an array of official responses to the explosion, including information from the official Weibo account of the Beijing police, and the response from China’s Ministry of Foreign Affairs as reported by the Global Times.”)

Have a taste of Chinese rule of law at Beijing US embassy explosion site! Scene 1: A bystander (woman w flower print shirt @ far right) kindly decided to share images and video – apparently passed to her by a friend – w a scrum of journalists via WeChat pic.twitter.com/EnfBkuMcoy

The internet enables journalism/sharing! Er, sort of. Images of the bloodied ground (aftermath) come through on WeChat but not her video material despite multiple tries – already a bit fishy pic.twitter.com/9veBxy98ih

I turn my back for sec and next thing I know the poor woman has been dragged across the street away from the journos by plainclothes men o.O pic.twitter.com/F2aRaVFk6b

Scene 3: The abduction.
“Why? What has she done wrong?” I ask.
“This is a family matter!” says green shirt.
It gets loud but I basically stuck my head in the car so could hear her loud and clear: “I do not know that man. I didn’t do anything! I was just a bystander!” pic.twitter.com/1974flP64s

Scene 4: The verdict
I love this. Sorry it’s upside down.
“Can I ask if that woman did anything wrong? Do u know what happened to her?” I ask.
“I’m sorry, I’m enforcing the law,” says cop, scuttling away like an awkward teen at a school dance (LOL)
Ohhh that’s what you’re doing pic.twitter.com/PQpaQVG09i

Cop 2 also doesn’t know why she was taken.
Cop 3: “It’s not convenient now for us to do interviews. We don’t know. Please leave – there are too many people here.”

Later as I was leaving, ran into Cop 1. “What media do you work for? Where are you from?” he asked, increasingly aggressive. When I wouldn’t say he said: “I have control over your visa!” China’s go-to in the field these days: threatening expulsion for critical coverage

Having a plainclothes pose as a relative seems common. Saw this scene near Houhai in May en route to a friend’s bday. Man helping shuttle her into van told me he was her bf. Bystanders said she’d talked back at cops for chasing away a busker, & asked them to let him keep singing. pic.twitter.com/NWPuJk7xKH

A few plainclothes policemen are trying to scrub off marks on a sidewalk next to the American Embassy in Beijing. Pedestrians are asked to turn back. “Don’t take photos; otherwise you’ll be detained,” a policeman blocking the road said. pic.twitter.com/1d6GsaeQcE

Weibo just censored all postings about explosion outside the US embassy, also deleted a topic page with the hashtag "explosion took place at US embassy" that had been viewed nearly a million times. pic.twitter.com/FImr6ed8j4

Beijing police totally avoided any mention of "the US embassy" in their official announcement.

if you're interested in this sort of thing: a thread that shows how and when bits of information were collected about breaking news (the explosion at the u.s. embassy in beijing) and turned into a story. https://t.co/B95Wq69kEv

I was about 500 meters away and heard the explosion. Have never heard a BOOM like that before. Blast Rocks Area Outside United States Embassy in Beijing https://t.co/Td6XNvS6j6

Was called by plaitclothes Chinese Traitor today. What did I do? pic.twitter.com/XAptFi94Pb

Bystanders said at least one person who received a group interview was taken away right after.

The group of cleaners were called in out of emergency from a nearby residential compound to clean up the scene. They didn't even work for the state, but a commercial company. Migrant workers from places like Henan.

Two hours later, Weibo allowed blue-checkmarked verified accounts of various media outlets to post about the explosion (in line with official statement), but earlier postings by users (including photos and footage) and relevant topic pages are no where to be found.

I guess that's what the Chinese Foreign Ministry spokesman meant when he said Chinese police have dealt with the incident in a "timely and appropriate manner." https://t.co/ir8BrdqJcU

According to Chinese media, a number of bloggers witnessed a 'large explosion' outside US embassy in Beijing. However, news was blocked on social media. "据多名网友爆料，刚刚，在位于北京的美国驻华大使馆附近疑似发生爆炸。使馆附近已经拉起了警戒线" 凤凰周刊 2018-07-26 13:47:45

So what happened to the arrested woman who tried to set herself on fire with gasoline outside the #USembassy in #Beijing earlier in the day? NYT and GlobalTimes cited witnesses. All accounts about the self-immolation attempt censored on Weibo. Official statement made no mention.

The concerning thing was that police spent a lot of their attention today on things like this below and chasing reporters who were filming. If they were scanning the crowd for any secondary bombings, it was not visible. No checking bags, etc. https://t.co/9r90c1aJfw

thread. The Chinese information management cycle. An event happens. It is then 'un-happened'. Finally an official version is 're-happened' https://t.co/ar2tQVL3ia