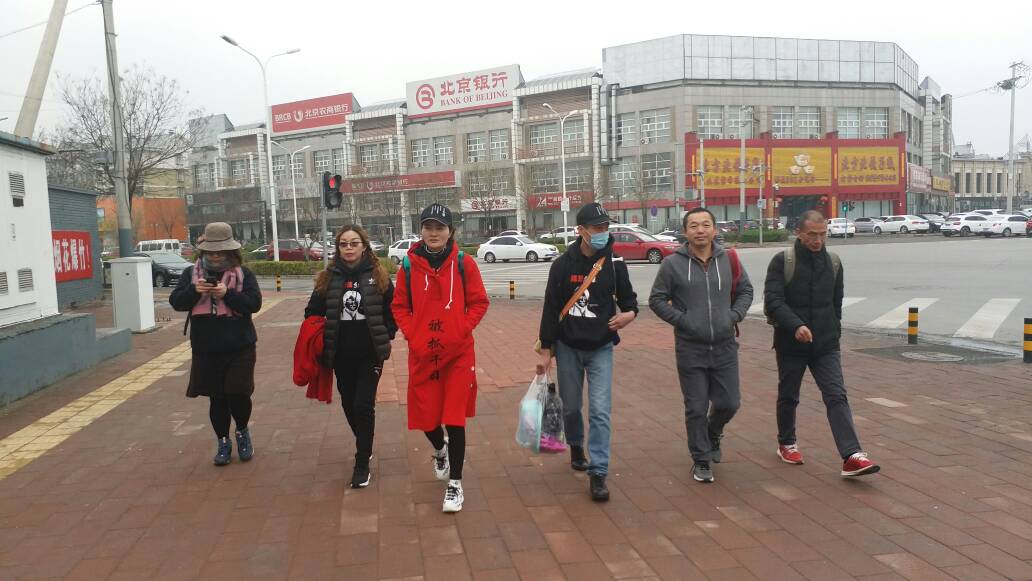 Activist Li Wenzu has embarked on a 60-mile walk from Beijing to Tianjin to seek information about the whereabouts of her husband, "quintessential rights lawyer" Wang Quanzhang, who was detained 1,000 days ago this week. Li is one of several wives and other relatives who have allied to campaign on behalf of "Black Friday" and other political detainees. Wang is the last of those taken in the infamous 2015 crackdown to remain incommunicado, following dozens of releases, trials, and sentencings. From AFP’s Joanna Chiu:

Li and a small group of supporters set off Wednesday on a march from Beijing to the “No. 2 Detention Centre” in the northeastern city of Tianjin, where officials last said he was being held.

They pressed on even during a freak snowstorm and plan to reach Tianjin by next Friday.

[…] When AFP called the Tianjin No. 2 Detention Centre on Thursday, a man who picked up said: “You should not ask about this matter.” [Source]

I thought that after 3 years, Li was used to telling her family's story to journalists. But her look of resolve faltered when she talked about how she had to tell her 5-year-old that no, dad wasn't on a business trip, and she spoke through tears. https://t.co/RFZf5qHlU6

The child gets nightmares and takes his mother's hand every time they walk up past the second floor of their apartment building. The state security officers have rented an apartment below theirs so they can monitor them in comfort, Li Wenzu said. https://t.co/p1qKEUuEPZ

Li Wenzu, whose husband "vanished" 1000 days ago, is marching to the city he might be held because she does not know if he is alive. Her hat is embroidered with the last letter he wrote to his parents where he said becoming a rights lawyer was a "calling". https://t.co/hXAOguDn8D pic.twitter.com/5jSihK1HCz

Li’s red anorak also bears the slogan "seized for 1,000 days," while she and others in her group are wearing "Free Quanzhang" sweatshirts.

“He’s probably holding out and saying he’s innocent,” [Amnesty International’s William] Nee said. “The other possibility, although less likely, is that he’s been tortured severely and he looks so different they don’t want to present him yet.”

[…] “He’s very persistent and stubborn,” said Li. “He did his job as a lawyer and he will never think of himself as someone who’s broken the law.”

[…] “The Chinese government puts a huge emphasis on ensuring that people confess and that the trials go according to plan in a scripted manner,” Amnesty International’s Nee said.

“It speaks a lot to the ‘rule of law’ under President Xi Jinping,” Nee added. “It’s more about manifesting the Party’s power.” [Source]

In a guest column at Jurist last week, Amnesty’s Patrick Poon described the authorities’ harsh treatment of rights lawyers including Yu Wensheng, who was involved in Wang’s defense and lost his law license and was then detained in January after publicly criticizing Xi Jinping and calling for political reform.

These courageous lawyers have often eschewed more lucrative and less controversial roles and instead chose to help people forced from their homes, religious believers facing persecution and many other victims of human rights violations. They only form a small group among China’s 340,000 lawyers but their role in defending human rights is essential. Without these lawyers, many victims of violations will be left without a champion to stand up for their rights.

[…] Their mistreatment strikes at the very heart of the role of defence lawyers in China’s legal system. Is it to defend their clients’ rights or merely to acquiesce to the government’s will? If the latter, lawyers in China are reduced to mere agents of the state. As the number of "post-lawyers" increases, the Chinese government’s claims of "rule of law" ring hollow, exposing the favoured concept of "rule by law with Chinese characteristics" for the sham it is. It is evidenced in former Minister of Justice Zhang Jun’s commentary in the People’s Daily in January 2018 in which he said strengthening the Chinese Communist Party’s role among lawyers is "the core part and fundamental measure" in deepening the reform of the legal system. It bluntly puts the Party above the law.

[…] More than a decade ago, there were less than a dozen known lawyers who took up human rights cases. The number of lawyers taking up human rights cases now, not to mention those who take up the less sensitive public interest cases, has grown to a few hundred, if not a thousand.

Their sheer effectiveness in protecting the human rights of others resulted in the harsh backlash from the authorities. With the government tightening its grip on the legal profession and civil society in general, there are sadly likely to be more ‘post lawyers’ in China. Yet there is hope, for despite everything the government throws at them, these remarkable lawyers remain resolute. [Source]