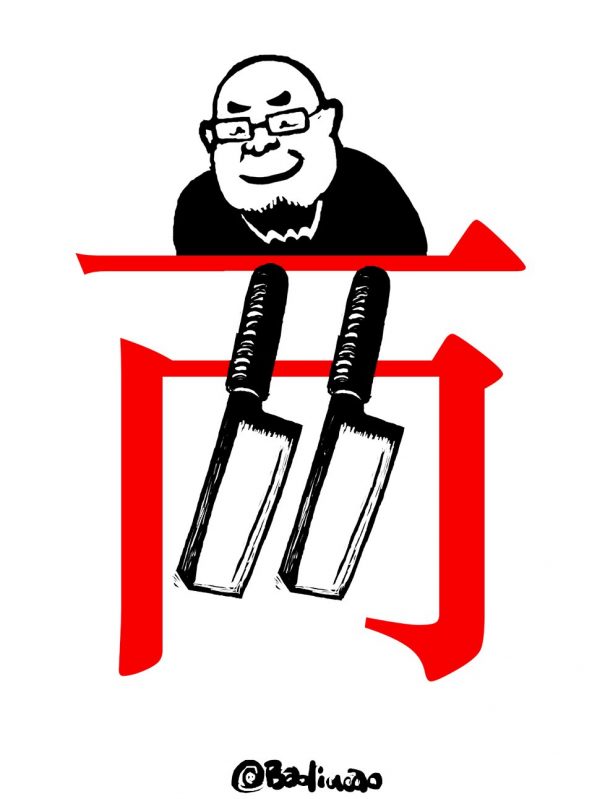 Wu Gan, the Chinese activist also known by the online nickname “Super Vulgar Butcher,” was detained two years ago last Saturday. Wu is known for his confrontational courthouse protests—see profiles at CDT and China Change—which were among the controversial and unorthodox tactics at issue in the subsequent Black Friday or 709 crackdown on rights lawyers and activists. CDT cartoonist Badiucao marked the anniversary with a play on the character liang (两), meaning “two”: Wu’s father Xu Xiaoshun, meanwhile, released a video praising and urging on the loose alliance of family members and other supporters that has coalesced in the wake of the 2015 crackdown. Xu outlined his son’s activism, including the 12 cases cited in his indictment, and described his own tangles with the authorities: he has repeatedly been detained, but never prosecuted, for embezzlement, most recently from June 2015 to January this year, in an apparent effort to exert pressure on his son. From China Change:

To be honest, reading the indictment I was very angry. Wu Gan was helping victims of injustice. He hasn’t done anything to rebel, but he has been named a rebel. I may disagree with his tactics, but I feel very proud of him. I may not fully understand why my son does these things, but, as someone born several months before the establishment of this Communist government, I understand the regime that rules the society in which I now live.

[…] I don’t use the Internet, but his friends showed me information online and I now know a lot of things that happened after Wu Gan got arrested. I know that a lot of lawyers have been arrested since Wu Gan’s arrest. This is known as the 709 Crackdown. Many 709 Crackdown family members, relatives, and friends have been doing everything they can to free their loved ones. Especially Ms. Wang Qiaoling (王峭岭) and Ms. Li Wenzu (李文足); they are really amazing. And many friends, relatives, and netizens support the 709 victims with bravery and intelligence. As Wu Gan’s father, and as a family member of a 709 Crackdown victim, I want to be part of the struggle and do my share, even though my hips and legs aren’t that nimble.

Before Wu Gan was arrested, he entrusted his affairs to some friends. They are able to go online and get more information, take quick action, and their numbers are quite large. I’m very reassured. I write this letter to express gratitude, and also to issue an appeal: Let’s all work together for the sake of 709 victims, and for the sake of my son Wu Gan. The more people who fight back, the better. [Source]

The BBC’s John Sudworth and AFP’s Joanna Chiu have reported this week on the current situations of Li Wenzu’s and Wang Qiaoling’s husbands, respectively. The latter, lawyer Li Heping, was recently released with a suspended sentence for subversion but, as Chiu writes, is in poor health following alleged mistreatment including forced and inappropriate medication. Nothing has been heard from or about the former, lawyer Wang Quanzhang, in well over a year: Li Wenzu told Sudworth that “I don’t know whether he’s alive or dead [….] He has simply disappeared from the face of the earth.”

Both reports quote renowned NYU law scholar Jerome Cohen, who commented to the BBC on Beijing’s wish for lawyers to act as apolitical economic technicians, “like dentists.” On his blog on Sunday, Cohen noted the upwelling of family support exemplified by Li Wenzu, Wang Qiaoling, and others who have suffered collective punishments such as evictions, blocked school enrollment, “stifling” surveillance, and travel restrictions on top of their loved ones’ detentions:

These recent spousal responses do represent something new because they are frequently collective or joint rather than individual actions as occasionally occurred in the past and also because the Internet and social media offer opportunities for protest that were not previously available.

[…] Another new aspect of current protests is a greater willingness of the spouses to go to Washington in an effort to light fires under the Congress and the Executive Branch. Families of jailed dissidents and their jailed lawyers have long fled to the U.S. for refuge, as some oppressed lawyers have also, but, prior to the 2015 crackdown, they did not generally stir up protests here. And recent protests here have not been limited to Washington but have also taken place in New York and other cities, with college-age children often joining mothers whose English is not fluent.