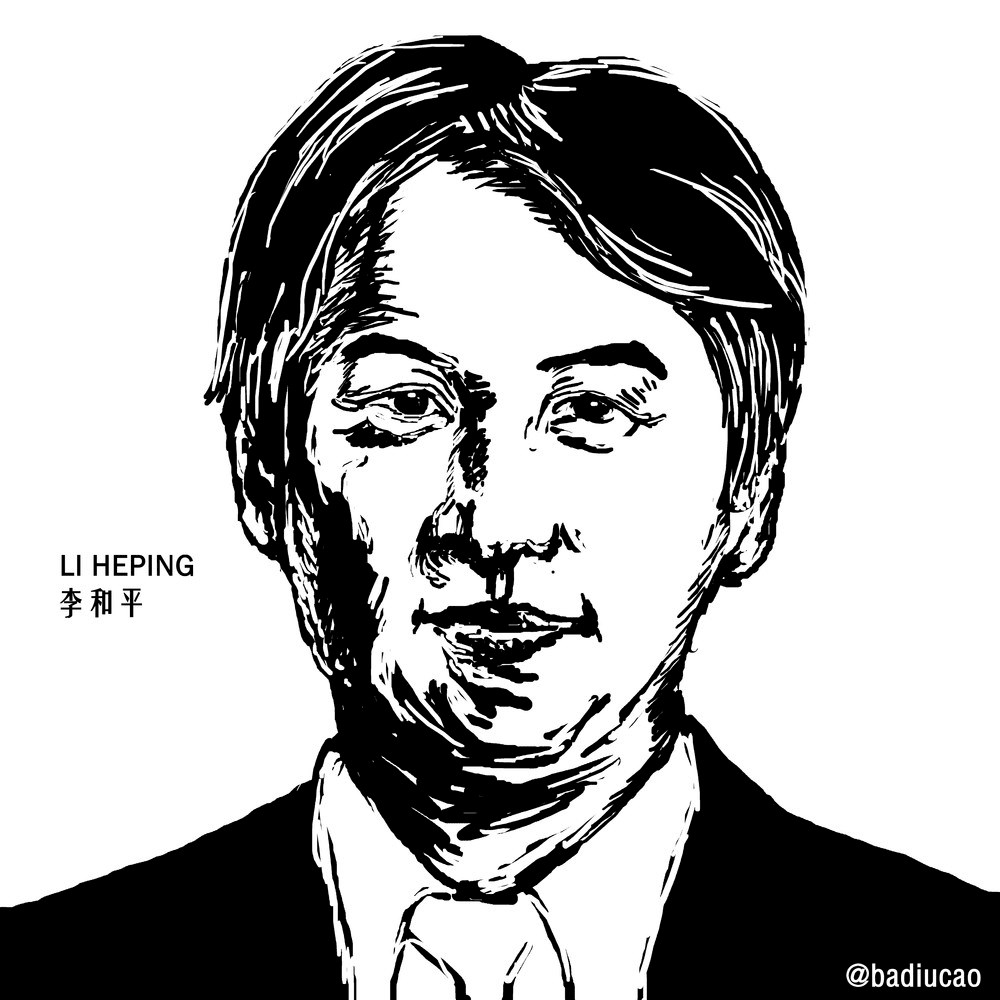 Rights lawyer Li Heping has received a suspended prison sentence for subverting state power following a closed trial on Tuesday, some 22 months after his detention in the 2015 Black Friday or 709 crackdown. The sudden announcement of his sentence follows the equally abrupt cancellation of fellow lawyer Xie Yang’s trial, which had been scheduled for the same day. Chinese Human Rights Defenders has updated its biography of Li, which covers his career and previous detentions, with details of the conviction:

On April 28, 2017, the Tianjin No. 2 Intermediate People’s Court weibo announced that Li had been tried in secret on April 25, and convicted and given a suspended sentence on April 28. Authorities held a closed door trial on the grounds it involved “national security,” and Li’s wife was not informed of the trial or sentencing hearing until after it had finished. According to the court’s announcement, Li pleaded guilty and said he would not appeal. He was represented by a government-appointed lawyer, after being denied access to the lawyer appointed by his family for the duration of his detention. The announcement claimed Li had “attacked” China’s political and legal system through postings online, interviews with foreign media, and accepting funding from overseas. [Source]

Li was also accused of having “accepted foreign funds, ‘hyped’ cases and intentionally provoked dissatisfaction with society among ‘some people who don’t know the fact of the matter,’” according to Reuters’ report.

Li’s wife Wang Qiaoling said in a video statement that she had known nothing of the trial until being surrounded by state security agents outside her home on Friday morning. Wang warned that her husband would still not enjoy genuine freedom, and that there is still “a very long road ahead” for the detainees and their families. Li Wenzu, wife of detained lawyer Wang Quanzhang who is still awaiting trial, also appeared in the video. From China Change’s translated transcript:

The state security agents said that the result — three years imprisonment, suspended for four years — is something that everyone worked hard to achieve, and is to the delight and satisfaction of all. They told me to immediately pack up the kids so they could take us all to see Li Heping.

Screw your delight and satisfaction. For Li Heping, who’s now a political offender, a three year sentence with a four year probation means that his personal freedom will be restricted for seven years. Over the last two years I’ve seen so many kind-hearted family members of 709 lawyers who’ve been hoodwinked by state security agents and taken to Tianjin — and then the whole family is cut off from the outside world. What on earth happened to them? We have no way of knowing.

Today, many journalists asked me: How do you feel about Li Heping gaining freedom? I told them that Li Heping is not free. According to Chinese law, Li Heping was given a suspended sentence, so he should be at home with us right now. But instead of that, a big gang of state security agents came to our door and tried to take me and my daughter to Tianjin. This shows that Li Heping is still being locked up by the authorities — simply under different auspices.

Li Wenzu: Today, state security told me very explicitly that Wang Quanzhang would be next. They told me to be a bit more obedient and Wang Quanzhang might be able to get a suspended sentence too. [Source]

Wang Qiaoling, like Xie Yang’s wife Chen Guiqiu, also rebuked the defense lawyer with whom the authorities had replaced Li’s original representatives. She reported earlier this month that the security presence around her had escalated unnervingly in recent weeks, with security personnel following her everywhere and a cluster of security cameras installed in front of her home. She said she had already arranged for her daughter to live with her grandparents in the event of her own disappearance.

Benjamin Haas reported on the sentencing for The Guardian:

“A suspended sentence does not mean he’s free until we actually get to see him and he’s allowed to speak freely, and given what we’ve seen in the past that probably won’t happen,” said Eva Pils, a professor at King’s College London and longtime friend of Li.

“It was a secret trial so we don’t know what state he is in,” Pils added. “In addition to our usual concerns about torture and physical health, I’m worried that this entire process may have robbed him of his mental health, especially after what they’ve apparently done to his brother.”

Li’s younger brother, Li Chunfu, emerged from 500 days of secret detention in January and was later diagnosed with schizophrenia, according to his family.

Li became well known for defending the disenfranchised, including Christian house churches, victims of forced evictions and free speech advocates. He worked within the scope of China’s legal system, rather than taking to the streets in protest. One Chinese security agent reportedly once told Li that the state considered him “more dangerous than Bin Laden”. [Source]

Prior to his detention in 2015, Li had focused on anti-torture advocacy following reported abuses during earlier detentions in 2007 and 2011. He is one of several lawyers to have suffered alleged torture in the wake of the Black Friday crackdown, prompting international protests and fierce denials from Chinese authorities.

“I think that was the difference for him,” said Mr. Poon.

Others said the government appeared to want to wrap up the remaining crackdown cases quietly. “This is a face-saving exit strategy for the Chinese authorities,” said Kit Chan, executive director of the China Human Rights Lawyers Concern Group, a nonprofit based in Hong Kong.

According to the group’s tally, there are still seven lawyers and activists still detained and awaiting trial. The first lawyer among the roughly two dozen arrested went on trial last August. Zhou Shifeng, of Beijing-based law firm Feng Rui, was sentenced to seven years for subversion.

Ms. Chan of the China Human Rights Lawyers Concern Group said a loose network of lawyers working on civil-liberties cases in China has actually grown since the crackdown; as of September it had 315 members, compared with 280-plus before the detentions started. [Source]

Prior to the sentencing, meanwhile, The Globe and Mail’s Nathan VanderKlippe reported on the kind of legal tactics for which the Black Friday detainees and others have been prosecuted, which authorities denounce as attempts to hijack the justice system, and supporters describe as desperate acts of last resort.

“In the courthouse, they stick to the law to the extreme. Whenever there is a little procedural problem they will just fight to the death,” said Sida Liu, a scholar at the University of Toronto and fellow of the American Bar Association who has conducted extensive research on China’s legal system.

And in court, they will employ tactics tantamount to “street theatre,” he said. “They use this very radical behaviour, sometimes fainting or some other kind of incidents to, you can say, disturb the trial or to delay the trial.”

[…] “Most lawyers aren’t asking for special treatment, just basic due-process rights to ensure a fair trial and rule of law,” said Frances Eve, a researcher for Chinese Human Rights Defenders. “Many resort to public advocacy to try and challenge the politicized court system in China.”

[…] “I actually agree with the argument that to some extent these lawyers brought it upon themselves, because they were using very radical means to challenge the state,” Prof. Liu said. “But I’m very sympathetic to why they did it. It’s precisely because they couldn’t find justice in the courtroom.” [Source]