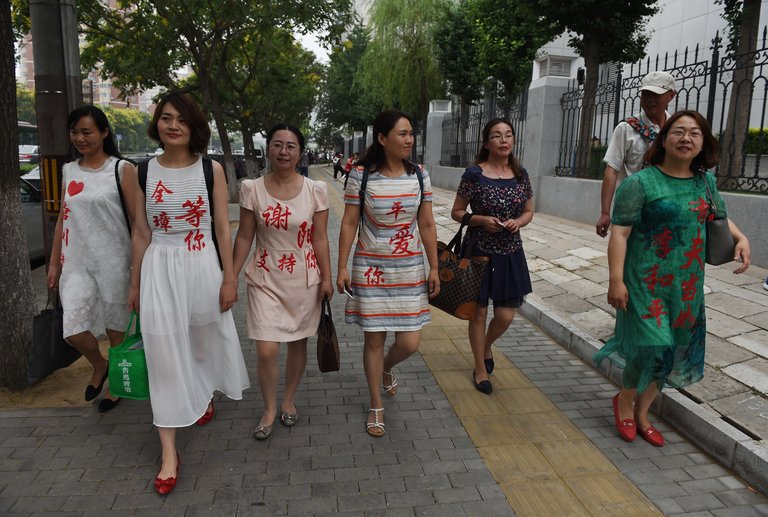 On Thursday, the wives of five Chinese and one Taiwanese current or recent political detainees testified to a U.S. congressional committee on their husbands’ cases and, in several cases, alleged torture. The six included Chen Guiqiu, wife of recently prosecuted lawyer Xie Yang; Jin Bianling, wife of lawyer Jiang Tianyong; Wang Yanfeng, wife of imprisoned lawyer and activist Tang Jingling; and Lee Ching-yu, wife of detained Taiwanese activist Lee Ming-che. In addition to the four who attended in person, Wang Qiaoling, wife of lawyer Li Heping, and Li Wenzu, wife of lawyer Wang Quanzhang, appeared on video. The New York Times’ Chris Buckley and Didi Kirsten Tatlow report on the wives’ emergence as a voice of resistance in response to collective punishments such as evictions, blocked school enrollment, pressure through other family members, “stifling” surveillance, and travel restrictions:

Before her husband disappeared into detention, Chen Guiqiu did not ask him much about his risky work as a Chinese human rights lawyer. Before word crept out that he had been tortured, Ms. Chen trusted the police. Before she was told she could not leave China, she never expected she would make a perilous escape abroad.

[…] After their loved ones disappeared in the wave of arrests, some family members, especially the wives of the detained lawyers, overcame their fear and fought back, often in a theatrical fashion. They used online appeals and visits to jails, prosecutors and courts. They gathered in bright red clothes and with red buckets to publicize their demands for information and access to the prisoners.

[…] Chinese state investigators have long applied pressure on detainees’ families to win cooperation and confessions. [See examples via CDT.] But this time their tactics seemed more systematic, said Wang Qiaoling, the wife of a detained lawyer, Li Heping. Mr. Li was recently released after being tried and receiving a suspended prison sentence.

“They can treat you like hand-pulled noodles, squeeze you into any shape,” Ms. Wang, 45, said in an interview. “If you’re isolated and scared, it’s hard to resist.” [Source]

The Guardian’s Tom Phillips detailed the wives’ accounts and appeals for American support. Doubts have mounted about the Trump administration’s commitment to human rights. American assistance in Chen Guiqiu’s recent escape has been seen as encouraging, but the U.S. citizenship of one of her daughters makes it an unusual case, which also predates Trump’s marked softening toward China following Xi Jinping’s state visit in April.

Terry Halliday, the author of a book about China’s human rights lawyers, said the lawyers’ wives had opened up “a new line of struggle that we have not seen before in China”.

“These women have become a very powerful and visible public presence both of criticism of the government, of appeals for the release of their loved-ones but also impugning China in the eyes of the world. It is remarkable.”

“It’s a whole new front,” Halliday added. “It is not so easy for the government to silence wives and daughters.”

Thursday’s hearing was part of a push by human rights groups to convince the Trump administration to use a law called the Magnitsky Act to bring sanctions such as travel bans or property seizures against Chinese officials involved in human rights abuses.

“We should be seeking to hold accountable any Chinese officials complicit in torture, human rights abuses and illegal detentions,” said Chris Smith, the Republican congressman who chaired the session and said he was compiling a list of potential targets. [Source]

Ahead of the hearing, Changsha police released video to challenge claims that Jiang Tianyong had been tortured to the point that he could no longer stand. Reuters’ Christian Shepherd reports on the release and Jiang’s wife’s lingering fears:

His wife, Jin Bianling, who is in the United States, said on Twitter on May 11 that an “unnamed individual within the Changsha system” told her Jiang had been tortured.

[…] Changsha police released a video on their social media account showing Jiang walking up and down a corridor of what appeared to be an apartment building in shorts and sandals.

Jiang’s rights had been fully protected while he was detained, and “doctors had been specially arranged to inspect and treat an old leg wound”, the police said in the post.

They said the video was taken on Wednesday afternoon.

[…] Jin told Reuters she was very suspicious of the video, saying it was a set-up shot and that his leg looked discolored and “gray”.

“If they want to prove that he has not been tortured, the should let his lawyers visit and fully examine him,” she said. “As it is, we still don’t even know where he is.” [Source]

Patrick Poon, researcher at Amnesty International, told HKFP that the post may be related to Jin’s scheduled testimony, and raised doubts about the authorities’ version of events.

“The video actually cannot prove that he was not tortured as it’s unclear when it was taken. It’s only a single-sided story. The best way to show that he’s not tortured is to ensure that he has regular access to a lawyer of his own choice and access to his family,” he said.

“The UN Committee Against Torture noted in its Concluding Observation on China’s 5th periodic review that regular access to a lawyer is an important element to ensure that the detained person is not subjected to torture,” Poon added. [Source]

Meanwhile, South China Morning Post’s Choi Chi-yuk and Eva Li report a new move to consolidate political control over China’s legal profession, a long-running campaign whose other recent components include the prioritisation of political over professional factors in a new ranking system for lawyers.

The northern Chinese city of Tianjin is set to become a new front in the Communist Party’s war for ideological control, with political commissars to be installed in lawyers associations in the megacity this week.

[…] While it is still unclear whether other cities will follow suit, Tianjin has been playing a pilot role in political developments for rest of the country since Li Hongzhong became its party boss in September 2016. Li has been one of the most vocal advocates of “absolute loyalty” to President Xi Jinping.

Tianjin’s move was in line with the nationwide development of enhanced party control over non-governmental organisations and social groups.

[…] Lawyers associations in China advise justice departments on approval and renewal of each lawyer’s licence to practise from year to year. [Source]