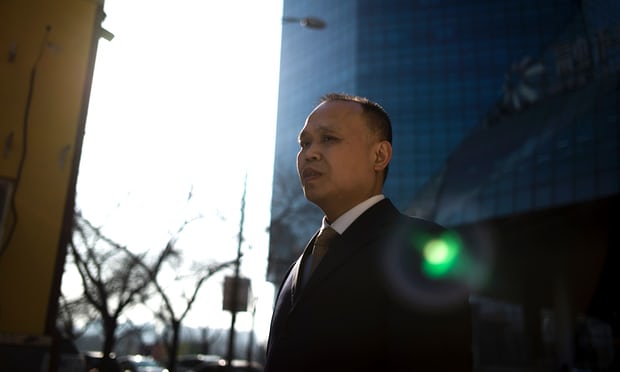 Rights lawyer Yu Wensheng was detained on Friday while walking his son to school, The Guardian’s Tom Phillips reports:

[Yu’s wife Xu Yan] said her son had seen at least four police vehicles and a dozen officers involved in the operation, including a SWAT team. “They surrounded Yu,” she said, adding: “None of Yu’s actions were illegal.”

[…] “I’m shocked he has been taken,” said Patrick Poon of Amnesty International. He suspected the detention of Yu, whose legal license was revoked days earlier, was retaliation for a recent article attacking the party’s top brass: “The message is clear: don’t ever criticise state leaders … or you will end up in jail.”

[…] In a 2015 interview with the Guardian, Yu insisted he would not be cowed. “Somebody has to make the sacrifice … I’m much happier facing oppression than standing by watching the wrongdoing and not trying to change it.” [Source]

Yu suspected that the revocation of his law license was a response to his authorship of an open letter—translated in full by CDT—to last October’s 19th Party Congress. In it, he outlined the deterioration of human and civil rights in China over the past five years, writing that under Xi Jinping “the rule of law has declined, torture has spread unchecked, and miscarriages of justice have grown without restraint.” He therefore urged delegates to unseat Xi and “implement comprehensive reform of the political system to establish a China of freedom, democracy, human rights, and the rule of law. Return politics to the people.” Instead, Xi’s signature “Thought for the New Era of Socialism With Chinese Characteristics” was enshrined in the Party constitution. On Friday, state media reported plans to incorporate it into the national constitution as well. Earlier in the week, Yu had posted another open letter, reiterating his call for reform. From the AFP:

“Designating the nation’s president, as head of state, through a single party election has no meaning as an election,” he wrote.

“It has no power to win confidence from the nation, civil society, or the world’s various countries.”

Yu has said that in 2014 authorities imprisoned and tortured him for 99 days for allegedly “disturbing public order”.

He is perhaps best known for being one of six lawyers who attempted to sue the Chinese government over the country’s chronic smog.

At the time, he scoffed at concerns that he might be detained for his actions, telling AFP last year: “If we do things according to the law and still get detained… it will be just the thing to show people the true nature of our so-called ‘rule of law’.” [Source]

He describes his 2014 torture, screaming like a wild animal, unrecognizable even to himself. A brave man to confront again #China’s brutal methods. The world must keep watch and maintain pressure. @tomphillipsin @peterdahlen @patrickpoon https://t.co/akbZbNyBjD