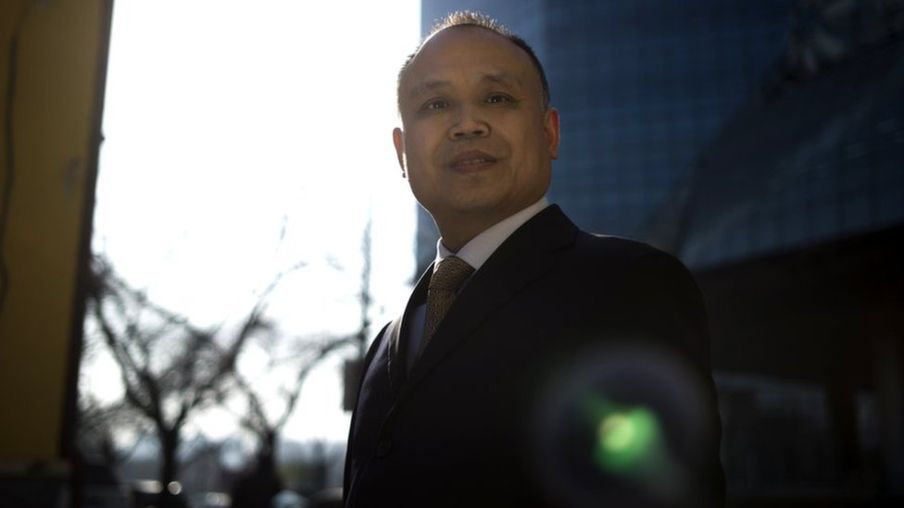 Prominent Chinese human rights lawyer Yu Wensheng, who has vocally criticized Xi Jinping’s rule and CCP authorities’ ongoing crackdown on rights advocacy and activism, tweeted a copy of a letter he received on Monday from the Beijing Bureau of Justice informing him that his legal license has been revoked:

BBC News reports on the official reason given for the revocation. Yu believes his license was truly revoked in retaliation for an open letter he penned to the delegates of the 19th Party Congress as it convened last October:

A Chinese human rights lawyer says his licence has been revoked three months after he wrote an open letter criticising the ruling Communist Party.

[…] He is among hundreds of human rights lawyers who have recently been detained and interrogated by authorities. [See CDT coverage of the 2015 “Black Friday” or “709” crackdown on rights lawyers and activists.]

According to the letter, Mr Yu’s licence was cancelled because he had not been employed by a licensed legal firm in the past six months.

[…] Mr Yu’s wife, Xu Yan, said in a statement that her husband had tried setting up an independent legal practice after he left his old firm last year.

But he had received another letter on 12 January in which the Beijing municipal authority refused his application to set up a practice. […] [Source]

Yu’s letter, dated October 18, 2017—the day that the CCP 19th Party Congress convened—called on Party delegates to remove Xi Jinping from the seat of General Secretary of the CCP in order to allow political reform and a free and democratic China. Human Rights in China posted a summary and the Chinese text of the letter, which CDT has translated in full and added links for context:

Suggestion that Xi Jinping Be Dismissed by the CCP 19th Party Congress, and that Comprehensive Political Reform be Put Into Effect

Delegates of the 19th Congress of the Chinese Communist Party:

Since the CCP 18th Party Congress in 2012, China’s human rights have worsened, the rule of law has declined, torture has spread unchecked, and miscarriages of justice have grown without restraint. CCP authorities speak of freedom, democracy, equality, and rule of law; in reality China has no freedom, no democracy, no equality, no rule of law, and some in power have let corruption run amuck.

In 2013 CCP authorities suppressed the “New Citizens Movement,” mass-arresting citizens who had called for “officials’ public disclosure”; in 2014 CCP authorities cracked down on the Hong Kong “Occupy Central” movement, and on Beijing and Guangzhou citizens who supported that movement; in 2015’s “709” crackdown incident, CCP authorities detained “human rights lawyers” and “human rights defenders” on a large scale. Over the past five years, CCP authorities have sadistically assaulted innocent compatriots in the “Qing’an incident,” the “Lei Yang incident,” and etc., and the assailants are still at large and outside of the law. Over the past five years CCP authorities have continued the persecution of “Falun Gong,” their destruction of crucifixes, and their suppression of religious liberty. Over the past five years there has been a rampage of “vicious laws,” including the “National Security Law”, the “Cybersecurity Law,” etc., suppressing the defense of rights for dissenting citizens, punishing them for their expression while safeguarding the interests of the elites.

Over the 97-year history of the CCP, over the 68-year history of their establishment of political power, autocracy has centralized power and corruption has spread thoroughly, with inhuman offenses committed to govern the people’s fate.

Holding power as top leader of the CCP for the past five years, Xi Jinping has broken with historical trends, reversing history and strengthening totalitarian rule; he is not suitable to continue holding power.  Acting as a lawyer in China, Yu Wensheng strongly suggests that China’s 19th Party Congress dismiss Xi Jinping from office, and conforming with historical trends implement comprehensive reform of the political system to establish a China of freedom, democracy, human rights, and the rule of law. Return politics to the people.

Coverage from Reuters’ Christian Shepherd describes recent legal reforms that critics say aim to restrict lawyers’ rights defense activities, and quotes Yu, who has pledged to continue his rights activism despite his current lack of a legal certification:

Yu told Reuters on Monday that he believed the revoking of his legal license was part of reprisals for penning the open letter, but that it only made him more determined to persevere with his rights activism.

[…] A set of measures on the practice of Chinese law firms and lawyers was revised in late 2016 to include higher levels of scrutiny of the speech and conduct of lawyer, as well as greater requirements of political loyalty for firms and practitioners.

Rights groups say the revisions were aimed at preventing the legal community from taking on sensitive rights cases or speaking out against political prosecution of legal work.

Yu had also been involved in attempting to defend a fellow rights lawyer Wang Quanzhang, who was detained during a spate of lawyer detentions in July 2015. Authorities have blocked his attempts to meet Wang. […] [Source]

Wang is the last remaining detainee from the 2015 Black Friday crackdown, and has now been held incommunicado for over 920 days. At China Change, Yaxue Cao this week described Wang’s work, lengthy detention, and alleged torture.