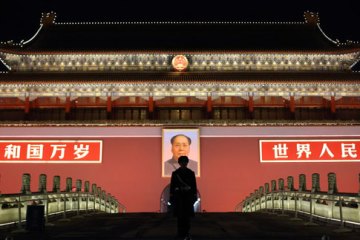 After draft national security legislation was criticized by analysts in May for its exceptionally wide reach and potential to limit citizens’ rights, the National People’s Congress approved the new security law on Wednesday, 154 votes to none with one abstention. A report from Edward Wong at the New York Times notes that the newly enacted law reaches even farther than the controversial draft version, offers little concrete direction on sentencing for violators, and appears intent on bolstering Party rule in China. The security law comes as two other controversial laws are expected to soon pass—one further limiting the activities of foreign NGOs in China, and the other focused on counterterrorism; Wong has previously written that all three drafts relate to “ideological security,” and aim at criminalizing dissent.

The law says “security” must be maintained in all fields, from culture to education to cyberspace. A draft version of the law was released in May, leading to intense discussion about its long-term impact, but the version approved Wednesday is even wider in scope — adding, for instance, that security must be defended on international seabeds, in the polar regions and even in outer space.

[…] While those two laws [the foreign NGO management and counterterrorism laws], currently in draft form, have specific details on controlling foreign groups, the national security law is a more abstract statement of principles, aimed at exhorting all Chinese citizens and agencies to be vigilant about threats to the party. Legal scholars and analysts in China say it will probably lead to the security apparatus amassing more power, and to courts employing a broad definition of national security violations. Human rights advocates expect the same and say they are worried that defendants accused of such violations will have little legal protection.

[…] A summation of ideas expressed by Mr. Xi in speeches and policy statements since he took power in late 2012, the national security law contains the widest statutory interpretation of threats to the Communist Party since the Mao era, as well as the most expansive definition of the party’s footprint across the world.

[…] Analysts say one purpose of the new law is to further indoctrinate ordinary Chinese with Communist Party ideology and the party’s perception of what constitutes an external threat. On Wednesday, Xinhua, the state news agency, posted on its microblog account that April 15 was now “national security education day” and that propaganda and education would be carried out “to enhance everyone’s awareness of national security.” [Source]

It declares both cyberspace and outer space to be part of China’s national security interest, along with the ocean depths and polar regions, where Beijing has been extending its exploratory activities.

Zheng said the internet, which is subject to strict censorship in China, was “a significant infrastructure facility of the country” and Beijing’s sovereignty over it should be “respected and maintained”.

She said the new law provided a legal foundation for “the management of internet activities on China’s territory and the resisting of activities that undermine China’s cyberspace security”. [Source]

Read more about recent clashes with Washington over cybersecurity and efforts to promote the idea of “Internet sovereignty” in defense of domestic Internet regulation; and China’s ambitions in outer space, polar, and deep-sea exploration, via CDT.

While the new law also states that Hong Kong and Macau must help in protecting China’s national security, it doesn’t in theory directly apply to the two semi-autonomous regions. The South China Morning Post reports that Hong Kong Chief Executive CY Leung was quick to assure concerned constituents that the new law will not apply in the region and that there were no plans to reenact the controversial security-related Article 23 of Hong Kong’s Basic Law that led to massive protests in 2003, but also added that the region does bear responsibility in maintaining national security:

As Beijing passed a sweeping new national security law yesterday, Chief Executive Leung Chun-ying was quick to assure Hongkongers that it would not apply to the SAR, and that the government had no plans to enact the controversial Article 23 of the Basic Law.

But Leung said the city did have a responsibility to help ensure national security, which it should do by local legislation.

Pro-democracy politicians have suggested the Hong Kong government may soon attempt to resurrect national security legislation last attempted in 2003, which was shelved following massive street protests involving as many as 500,000 people.

But Leung said the passage of the mainland’s national legislation would have no impact on Hong Kong.

[…]”Naturally, Hong Kong is part of the country and has a responsibility and obligation to protect its security,” Leung said. [Source]

At the Wall Street Journal, Chun Han Wong contrasts critics’ worry that the law will be used to manage dissent with official defense that the law is needed to respond to new threats:

[…] Rights advocates […] have criticized the law for its vague provisions, as well as the lack of detail on what Beijing deems as offenses and what penalties would apply.

Such ambiguities that would “make it impossible for people to know what behavior is actually prohibited,” and allow authorities to prosecute anyone they deem to be a threat, said William Nee, a Hong Kong-based researcher at Amnesty International. “This time the devil is in the lack of detail.”

Ms. Zheng, the legislator, rebuffed criticisms that the law is vague. China’s definition of national interests “is very clear-cut, and isn’t any broader than those set by other countries,” she said. “We welcome all enterprises to operate lawfully and provide lawful services in China.” [Source]

Amnesty International has posted a summary of their concerns about the human rights implications of the sweeping new law, and calling for the immediate scrapping of the new legislation:

“The definition of ‘national security’ under this new law is virtually limitless. The law gives a blank cheque to the government to punish and monitor anyone it does not like – human rights activists, government critics and other opposition voices,” said Nicholas Bequelin, Amnesty International’s Regional Director for East Asia.

“This law clearly has more to do with protecting the Communist Party’s control of the country than with national security. The leadership of the Party and its monopoly on political power is explicitly listed as being part of ‘national security’ in the law.”

“The government has long been using national security charges, such as ’inciting subversion’, ’separatism’ and ’leaking state secrets’ to suppress and imprison activists and government critics. The expansive definition given by the new law is likely to further this trend.” […] [Source]

#China new sweeping National Security Law puts all decision making power to a body that has no formal existence. In other words: Xi's hands.

Who is this 中央国家安全领导机构？Nobody knows. Yet #China new National Security Law institutes it at the apex of the security apparatus. I call it Xi.

#China's new National Security Law illustrates that Xi has no qualms about further dispensing of the facade of formal state institutions.