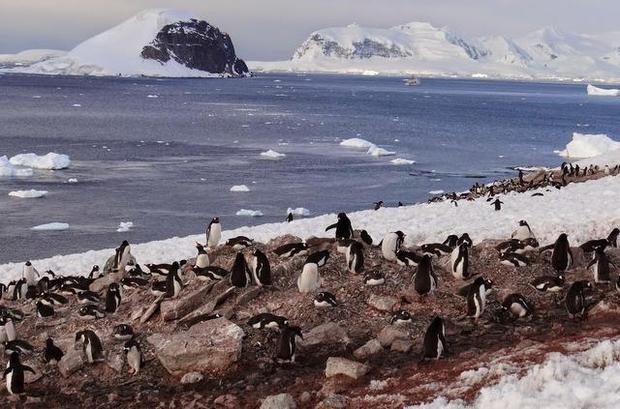 [… Beijing] has bolstered spending on Antarctic research, and as the early explorers, especially the United States and Australia, confront stagnant budgets, there is growing concern about its intentions.

[…] China’s operations on the continent — it opened its fourth research station last year, chose a site for a fifth, and is investing in a second icebreaker and new ice-capable planes and helicopters — are already the fastest growing of the 52 signatories to the Antarctic Treaty. That gentlemen’s agreement reached in 1959 bans military activity on the continent and aims to preserve it as one of the world’s last wildernesses; a related pact prohibits mining.

[…] “This is part of a broader pattern of a mercantilist approach all around the world,” [executive director of the Australian Strategic Policy Institute Peter] Jennings added. “A big driver of Chinese policy is to secure long-term energy supply and food supply.”

[…] In the unspoken competition for Antarctica’s future, scientific achievement can also translate into influence. Chinese scientists are driving to be the first to drill and recover an ice core containing tiny air bubbles that provide a record of climate change stretching as far back as 1.5 million years. It is an expensive and delicate effort at which others, including the European Union and Australia, have failed.

[…] “China is playing a long game in Antarctica and keeping other states guessing about its true intentions and interests are part of its poker hand,” […] said [Professor Anne-Marie Brady, author of the forthcoming book “China as a Polar Great Power”]. But she noted that China’s interest in finding minerals was presented “loud and clear to domestic audiences” as the main reason it was investing in Antarctica. […] [Source]

While the Times article emphasizes Beijing’s tendency towards neo-mercantilist policy and securing resources abroad, Brookings fellow and Tuft’s University professor Daniel D. Drezner notes that the concerns cited are part of a larger trend in punditry, and suggests that worry about the intent behind China’s international strategy could be better directed towards other geographic locations:

Articles like this pop up in the mainstream media like clockwork every six months or so — see this one from the Economist from November 2013, for example.

How worrying should this stuff be? On the one hand, if China decides it wants to try land-grabbing in Antarctica, it’s well-versed in the salami tactics necessary to change the facts on the ground. As I noted a few months ago [.]

[…] Resource extraction below the Antarctic Circle is possible, but there are an awful lot of places in the world where it is even more possible. At some point, technological innovation might make it cheaper to drill and mine. But by the time Antarctic coal is commercially retrievable, for example, it’s not obvious that Beijing will want to have much to do with the coal in the first place. In other words, it is possible that the technological change that enables countries to extract Antarctic resources also obviates the need for them.

I’m not saying that there is no reason for concern. But this is one of those stories where the International Fellowship of Pundits tends to stroke their chins and murmur about Great Games and sound very worried. And I think there are at least five parts of the globe other than Antarctica where any concern should be directed. [Source]

Early last year, Chinese experts called for an official blueprint on polar objectives to abate mounting international concern. Shortly thereafter and in light of a rising number of Chinese tourists to the frozen and southernmost continent, the director of the China Tourism Academy called for strengthened tourist regulations to protect its fragile environment.

In 2013, China was granted permanent observer status at the Arctic Council.

For more on scientific concerns about the impact of Chinese Antarctic krill fishing, see a recent report from Stuart Leavenworth at McClatchy.