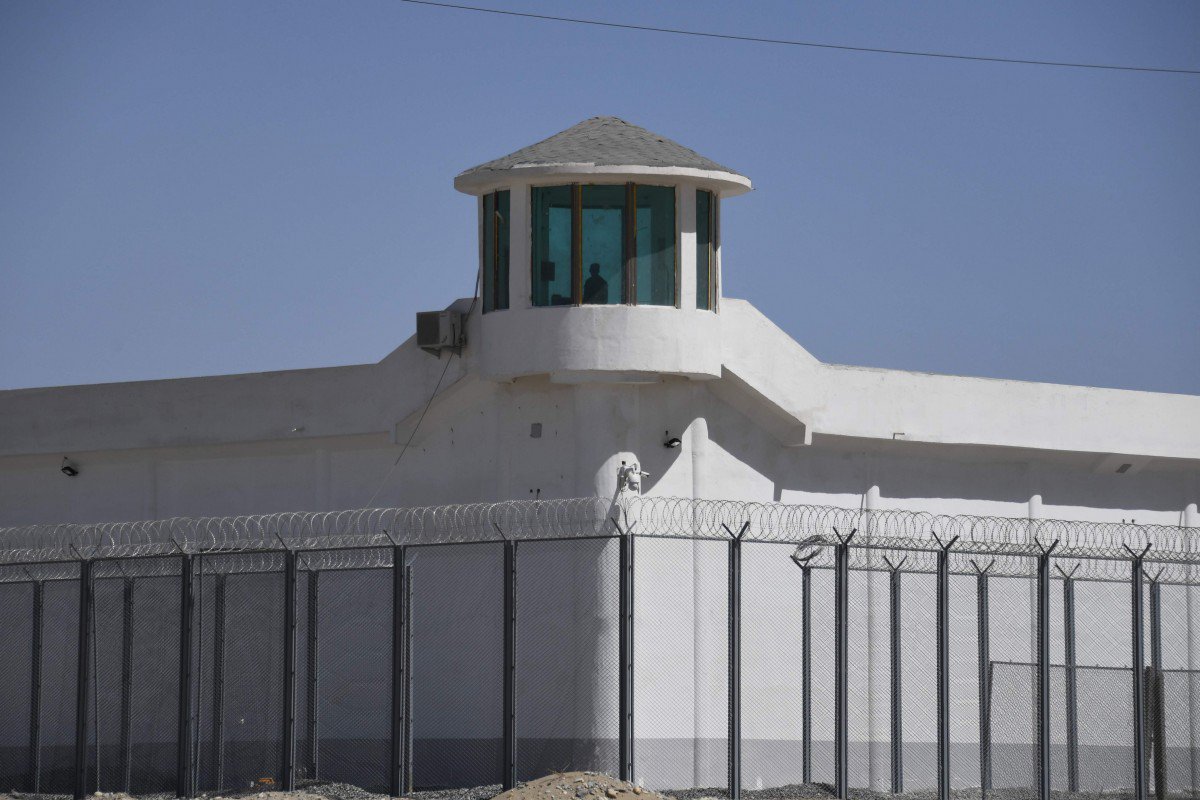 As part of the Chinese government’s response to international criticism of its mass detention program in Xinjiang, authorities have defended the internment camps as legal “vocational training” facilities designed to combat religious extremism. The centres are portrayed as inviting boarding schools equipped with volleyball courts and ping-pong tables. However, according to a recent research report by independent German researcher Adrian Zenz, the government’s own documents provide evidence to the contrary. Zenz writes that the camps are described in internal government documents as places of coercive internment complete with heavy police presence and brainwashing sessions. South China Morning Post’s Nectar Gan reports:

Numerous government documents, for example, make clear that these “trainees” are in fact in detention, despite propaganda efforts to paint them as attending “voluntarily”. Phrases like “detained trainees” and “persons detained in re-education” frequently appear in the documents, including reports of government employees’ visits to villages.

[… The Xinjiang “Education and Training Bureau” which oversees the camps,] and its local branches, the research paper says, are generally “listed along with other internal security and law enforcement agencies such as the courts, the inspection bureau, the public security organs and the justice system. Their budgets are part of domestic security budgets.”

The state’s narrative emphasises the vocational, language and legal training “trainees” receive at the camps, but Zenz found at least five Xinjiang government or educational institution websites “clearly and unambiguously state that [they] are dedicated brainwashing institutions”. [Source]

BREAKING: my new paper on Xinjiang’s camps is packed with strongly incriminating evidence on the nature & extent of the internment campaign. Based on detailed gov’t sources, this should be enough to spark significant int’l action against these atrocities.https://t.co/U2es2Z7T82 pic.twitter.com/vrVbBZnfAQ

Josh Chin at The Wall Street Journal profiled Zenz in May, writing that he has played an important role in forcing the Chinese government to acknowledge the existence of the camps.

His most influential work began in February 2018, after a Chinese diplomat denied reports about the camps and advised journalists to take Beijing at its word.

Mr. Zenz uncovered a trail of bidding papers, budget plans and other documents that rights groups, scholars and diplomats say prove the extent of the construction of the camps as part of a Communist Party campaign to forcibly assimilate ethnic Uighurs and other minority groups.

Mr. Zenz’s initial estimate that the camps have held as many as one million people has been accepted by the U.S. and some other governments, though rejected by China. He has testified before U.S. Congress and Canada’s Parliament.

Chinese diplomats stopped denying the existence of the camps in August, and began defending them as vocational training centers necessary to fight terrorism. It was a rare about-face that experts and activists said Mr. Zenz’s work helped bring about. [Source]

Turkey is the only Muslim nation to have regularly expressed concern about the situation in Xinjiang, including in February at the U.N. Human Rights Council, to China’s anger.

But meeting Chinese President Xi Jinping in Beijing, Erdogan struck a more positive note, according to a Chinese state media read out of the event.

“It is a fact that the peoples of China’s Xinjiang region live happily in China’s development and prosperity,” state television paraphrased Erdogan as saying.

“Turkey does not permit any person to incite disharmony in the Turkey-China relationship. Turkey firmly opposes extremism and is willing to increase mutual political trust with China and strengthen security cooperation.”

Speaking to RFA’s Tibetan Service, a Tibetan living in the area said most of the monks and nuns were from Jomda (Jiangda) and Palbar (Bianba) counties, in the Tibet Autonomous Region’s (TAR) Chamdo (Changdu) prefecture, and had been sent there for political re-education.

“The Chinese authorities have ordered that the number of monks and nuns staying at Yachen Gar not exceed more than 4,700, and because of that many monks and nuns have been evicted from the institute,” the source said, speaking on condition of anonymity.

“Those monks and nuns who were forcefully returned to their birthplaces have now been rounded up by local Chinese police and made to attend political re-education classes [at detention centers] in their hometowns.”

[…] “The monks and nuns are forced to wear the clothes of laypersons at the detention center and the Chinese authorities make them denounce [Tibetan spiritual leader] the Dalai Lama on a daily basis, as well as memorize political propaganda, which they are later tested on,” said the source, who also declined to be named.

“These monks and nuns could be held for political re-education for another several months before they are released to their families. After that, they will be restricted from re-enrolling with any other monasteries or relocating elsewhere.” [Source]