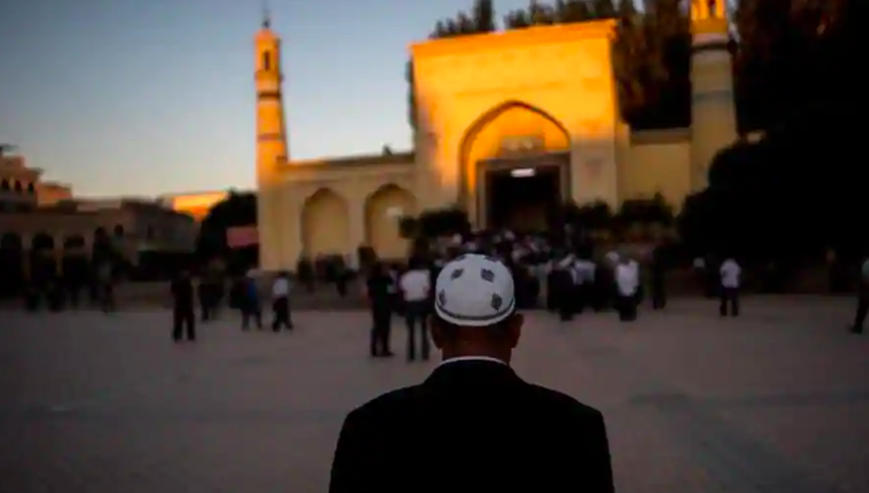 With international backlash growing over reports that as many as one million Muslims in Xinjiang have been forced into extralegal “re-education” camps, China has come forth with its most extensive defense to date to justify its detention program after nearly a year of silence and denial. In an extended interview, the chairman of Xinjiang’s local government Shohrat Zakir provided several legal justifications for the camps and claimed that they are pleasant vocational centers that provide language and skills training to help combat terrorism and religious extremism. China had previously denied the existence of the detention camps during a UN hearing on human rights. A law revised earlier this month retroactively legitimized the use of the camps as “vocational training centers,” though it did not provide any legal justification for the prolonged, involuntary detentions that have occurred. Zakir’s claims go against first-hand accounts by former detainees who described the facilities as places of enforced political indoctrination where communities are forced to give up their cultural and religious identity. The Wall Street Journal’s Josh Chin reports:

Reporting by scholars outside China and interviews with former detainees and their relatives by foreign media, including The Wall Street Journal, have documented the expansion of the detention program and the intense political indoctrination those held are subjected to. They described being held against their will, forced to sing patriotic songs and prohibited from praying.

In the Xinhua interview, Mr. Zakir contradicted those accounts, suggesting enrollment in the institutions is voluntary. He said the facilities sign “training agreements” with each trainee.

[…] He described the vocational centers as resort-like facilities equipped with volleyball courts, ping-pong tables and film-screening rooms, where ethnic customs are respected, nutritious meals are provided “free of charge” and each air-conditioned room comes with its own TV.

According to interviews with former detainees and their family members, conditions in the centers vary widely. While some resemble vocational schools, others seen by the Journal look more like prisons, surrounded by thick walls topped with razor wire and watched over by armed police in guard towers.

Several former detainees told the Journal they were subjected to hours of political indoctrination daily and forced to denounce Islam. One said he was strapped to a chair for hours with his hands shackled behind his back and interrogated about ties to religious groups abroad, which he denied having. Authorities declined to comment. [Source]

The World Uyghur Congress has called out China for “distorting facts” about the camps. From Sutirtho Patranobis at Hindustan Times:

Dilxat Raxit, spokesperson of the World Uyghur Congress, however dismissed the official stand.

“Xinjiang officials of the Communist Party of China recently announced that ‘vocational skills education and training’ is to eliminate terrorism. It is completely distorting the facts and fabricating lies,” Raxit told HT over email.

“After being exposed, they (the government’s attempts) were renamed as skills training. Millions of Uyghurs were forced to give up their cultural beliefs, abandon the language used by their ancestors, and asked them to switch to Han Chinese names and diets. Is this the technical training they claim to provide a means for Uyghurs to make a living?” he said.

“After a year plus of denial, the Communist Party has decided to get out in front of the story, and put forward its own view over the legality and the nature of these detention camps,” James Leibold, an expert on Xinjiang at La Trobe University in Australia, said by email. “The party’s central leadership now seems determined to ‘standardize’ and ‘legalize’ their approach.”

Mr. Zakir’s comments appeared to be part of China’s preparations for an international meeting that could put the camps under further scrutiny. At a meeting of the United Nations Human Rights Council in early November, foreign governments will have a chance to question officials from Beijing about the detention program and other intrusive security measures affecting Muslim minorities.

“This meeting is a very important occasion to raise the camp issue,” Dolkun Isa, the president of the World Uyghur Congress, an exile group based in Germany, said by telephone. (Uyghur is an alternative spelling of Uighur.) “China has denied the camps, but now it’s something that they just cannot hide.”

[…] “The Xinjiang authorities’ clumsy justifications for these camps only serve to illustrate what ‘the rule of law’ in China means,” said Maya Wang, a China researcher for Human Rights Watch. “The party bends it to its will and uses it as a weapon against perceived political enemies.” [Source]

As part of a concerted government propaganda effort around the Xinjiang camps, Chinese state television broadcaster CCTV aired a documentary during prime time on Tuesday giving viewers a rare glimpse inside the re-education facilities, reinforcing Zakir’s claim with footage showing the camps as places where happy and grateful detainees receive job and skills training. Highlights from Chris Buckley, and from Shelley Zhang’s longer commentary on Twitter:

Dispelling any doubts that the Chinese government is trying to create a new narrative about its indoctrination camps in Xinjiang, CCTV on Tuesday broadcast a primetime program praising the camps.https://t.co/aXJGscv671 pic.twitter.com/wo4LcWXBdf

This is being filmed in Hotan. Starts off with a graduation ceremony for the happy “students” at the vocational training center. pic.twitter.com/cetfNaMHZR

They interview a guy who’s learned how to make pants. His family is so proud. pic.twitter.com/1gPHw2jKs2

Speaking of economic opportunity, now CCTV is interviewing a student who says he makes 1300 yuan a month at the vocational school, which he sends to his family members. pic.twitter.com/2lMaxnkWuU

Also, the vocational school is free! With free, nutritious food. What follows is a bunch of scenes of students hanging out, playing chess, that would not look too out of place in some kind of college brochure. pic.twitter.com/FyVGCqzQRF

In conclusion, Xinjiang vocational schools are like nice colleges where they give people economic opportunities while preserving their culture and teaching them how to read. Also air conditioning, free food, and dance lessons. And don’t forget the non-cultural-genocide bread. pic.twitter.com/PrKMpUfaTO

So since this thread seems to still be getting views, I highly recommend listening to @limlouisa and @GraemeKSmith’s Little Red Podcast episodes about Xinjiang: https://t.co/W0PvpPUWIb and https://t.co/9Y0vtYstAY

Seeing this video again, it appears there are at least five cameras monitoring this classroom of a so-called "vocational skills training center", as seen on @CCTV.https://t.co/8Xvneh85hI pic.twitter.com/uKewVUR56g

As well as the five cameras noted by @DakeKang, four large microphones also hover over the classroom on @CCTV's latest propaganda piece insisting the internment camps are merely an exercise in China's benevolence towards Uyghurs. pic.twitter.com/Ogi3xdd4wX

Adrian Zenz from the European School of Culture and Theology tweeted that the Hotan City training center featured in the CCTV documentary was likely selected because it is one of the least guarded of the detention camps.

The state-run tabloid Global Times joined in on the offensive with a scathing editorial criticizing Western governments for undermining China’s “righteous” governance in Xinjiang:

Western opinion has launched a stinging attack on governance in Xinjiang. Who is standing on the righteous side, the Xinjiang government or Western forces? The Xinjiang government has been aiming to stabilize Xinjiang and wipe out violent terrorist attacks. After a terror attack on July 5, 2009, local government exerted enormous efforts to achieve this goal. But after another terror attack in 2013, the situation in Xinjiang deteriorated and was about to spiral out of control.

Since the vocational training centers were set up, the situation in Xinjiang has changed for the better. They may not operate flawlessly, but aim to stop impetuous killings and comfort people frightened by violent terrorist activities. These are the core of human rights.

What do those Westerners who denounce governance in Xinjiang want? They seem to show a tolerant attitude toward people who are brainwashed by extremism and commit acts that damage peace and order in Xinjiang.

Extreme thoughts used to spread recklessly in Xinjiang and radicals acted wantonly, leading to more violent terror attacks. More than 20 million people of all ethnicities in Xinjiang lost their peaceful lives. People from other parts of China didn’t dare travel there and young people from Xinjiang were leaving their homeland. The basic conditions of human rights in Xinjiang were being destroyed bit by bit. Is this what Westerners want? [Source]

According to China’s official narrative, the camps have been hugely successful in bringing stability to the region and a better quality of life to its people. Ben Westcott and Nanlin Fang at CNN quote Zakir:

“Today’s Xinjiang is not only beautiful but also safe and stable. No matter where they are or at what time of the day, people are no longer afraid of going out, shopping, dining and traveling,” he told state-run news agency Xinhua, Tuesday.

“There is still a long way to go for southern Xinjiang to eradicate the environment and soil of terrorism and religious extremism.”

[…] “Many trainees have said that they were previously affected by extremist thought and had never participated in such kinds of art and sports activities, and now they have realized that life can be so colorful,” he said.

The Xinjiang official added that while “trainees” had acted according to religion or family before their internment, they “now realized that they are firstly citizens of the nation.” [Source]

Statements from senior officials suggest that the “deradicalization” program in Xinjiang is set to continue indefinitely.