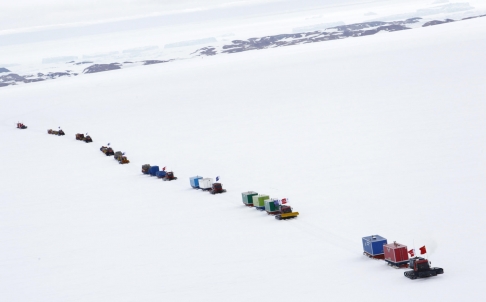 With China’s recent rescue of the trapped Russian research vessel Akademik Shokalskiy making headlines, experts are calling for China to produce a blueprint of its objectives in the Arctic and Antarctic regions to ease international concerns over China’s polar ambitions. South China Morning Post reports:

Wang Chuanxing , a deputy director of the Centre for Polar and Oceanic Studies at Tongji University, one of the institutes that signed the agreement on the research facility, said: “China will be more positively evaluated if we make it clear about what we are going to do in the region.”

Relations with Nordic states have grown more important to Beijing amid concerns about the impact of global warming on China and the country’s increasing demand for energy.

The Arctic is estimated to hold nearly a third of the world’s undeveloped natural gas reserves.

Song Lilei , an international relations professor also at Tongji University, agreed that Beijing needed to spell out its objectives in the Arctic and Antarctic. “Such a paper by China can help address the concerns of the Nordic states,” she said. [Source]

Meanwhile, on Jan. 10, China quietly released the draft environmental assessment reportof its planned fifth Antarctic research station to the other consultative states in the Antarctic Treaty, the international instrument governing Antarctic affairs. China’s new base would be located at Terra Nova Bay in the strategically important Ross Sea region, where the U.S., New Zealand, South Korea, Germany and France also have research stations. Since the new base will be a permanent station, it requires the approval of other Antarctic consultative states before it can be built. [Source]