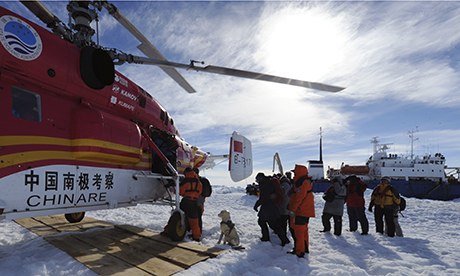 Passengers aboard the trapped Russian research vessel Akademik Shokalskiy were finally rescued on Thursday as a helicopter from China’s Xue Long icebreaker ferried them to a waiting Australian ship. The Shokalskiy has been trapped in ice in the Ross Sea off Antarctica since Christmas Eve. Xue Long attempted to free it late last week, but was unable to penetrate the unexpectedly thick ice, part of a mass dislodged from the continental ice shelf. The Guardian’s Alok Jha, one of the ship’s passengers, reported:

We trooped out in groups of 12 to wait next to our makeshift helipad on the ice, stomped flat by passengers on New Year’s Eve and, in the absence of paint, marked up with thick lines of powdered chocolate applied directly to the ice.

When it neared the ground, the KA32 helicopter’s two counter-rotating sets of blades sent jets of loose snow in all directions. Talking was impossible by this point, so we were signalled just to keep close to the the person in front, through the blizzard of snow and small chunks of ice, as we walked the last 50 metres to the aircraft. On board we were jammed in with as much luggage as would fit in between and on top of us all, and then we were off.

Twenty minutes later, flying over a seeming neverending surface of white and past the helicopter’s mother ship, the Chinese icebreaker Xue Long, we set down on an ice floe, 100m from the Australian icebreaker, the Aurora Australis. It took less than 15 minutes for the crew to unload us and the baggage and then the helicopter was gone, a dot in the sky, on its way back to the Shokalskiy to pick up more people. [Source]

To the crew of Aurora Australis + Xue Long – heartfelt thanks from all on the Shokalskiy. We know how far out of your way you all went (1/2)

…and at a time you had a lot of other, more important, work to do. Truly appreciated. Thank you. (2/2)

The rescue was a diversion from Xue Long’s intended mission, helping construction of China’s fourth Antarctic research station. See more on the rescue operation from Edward Wong at Sinosphere.