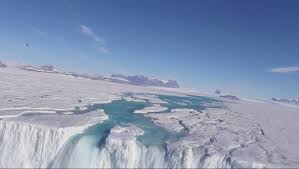 Some 400 delegates, from more than 40 countries and international organisations, will attend the annual meeting of the Antarctic Treaty, which begins on Monday and ends on June 1. China’s top diplomat, Yang Jiechi, and Vice-Premier Zhang Gaoli are representing China. The meeting will cover administration of the treaty, climate change, tourism and other management issues.

The number of Chinese tourists to the region has also grow in recent years. According to the International Association of Antarctica Tour Operators, some 38,478 people visited the continent in 2015-16, with 11 per cent coming from China, the third-largest source of tourists after the United States and Australia. [Source]

In recent years, Beijing’s tendency to draft policy aimed at securing natural resources abroad have drawn concerns from experts over its Antarctic ambitions. Ahead of the launch of the 10-day Antarctic Treaty summit in Beijing, Chen Jiliang, a researcher at the Chinese NGO Greenovation Hub, called on Beijing to release a document clearly outlining its ambitions in Antarctica to assuage international concerns. From the South China Morning Post:

If China wants to build trust and its power to be heard, it should do as other nations have and state its Antarctic strategy, including its interest and approaches, as it has done with its “Vision and Actions” for the Belt and Road Initiative.

A similar document on Antarctica would explain China’s polar policy and enable other countries to collaborate with it on joint interests. It would also empower Chinese officials tasked with realising it and legitimise public spending. Accountable and transparent Antarctic policymaking would allow China to have a greater say in the region.

[…] In the global commons such as Antarctica and its surrounding ocean, national interests must be balanced with the interests of all.

[…] With one of the most ambitious plans to combat climate change and build a sustainable economy, China’s next logical step is to align its polar policy with these environmental commitments and lead on conservation and science in an official strategy on Antarctica. [Source]

And as the meeting was convening, China’s State Oceanic Administration did release a white paper on Antarctica, which promised to ramp up research efforts in the region. Officials from the department also announced that China has no plans for mining in Antarctica. The South China Morning Post’s Liu Zhen reports:

“China is expected, on the basis of [advancing] scientific cognition of polar regions, to elevate its Antarctic activities,” read a white paper issued by the State Oceanic Administration (SOA) on Monday.

[…] “The focuses of China’s Antarctic expeditions are protecting the environment and increasing our knowledge and understanding,” Lin [Shanqing, deputy director of the SOA] said. “As far as I know, China had no plan for mining in the Antarctic,” he added.

While, according to Lin, Beijing currently lack of plans on Antarctic mining, another recent article from the SCMP noted that a Tsinghua University professor’s prediction that the opposite polar region will be tied to of China’s massively ambitious One Belt, One Road scheme because of its vast unexplored mineral resources.

China is one of few nations without domestic legislation regulating its Antarctic activities. The Global Times reports that SOA deputy director Lin Shanqing mentioned that Chinese legislators are discussing one:

“China is one of a few countries in the world that has signed the Antarctic Treaty but failed to enact a compatible domestic law,” Lin told the Global Times on Monday.

He said the National People’s Congress is currently researching the legislation, which will mainly focus on the environmental protection of Antarctica, but did not give a timetable.

The law is expected to regulate commercial activities in waters near Antarctica as China’s fishing of Antarctic krill – small crustaceans that are a critical food for the continent’s penguins and other creatures – has in the past raised some concerns in the Western media. [Source]

More on Lin’s comments, and on goals for this year’s Antarctic Treaty summit from the AP’s Matthew Brown:

Lin Shanqing, deputy head of the State Oceanic Administration, told reporters Monday that China wants “to make our contribution to the peaceful use of the Antarctic as a responsible and big country.”

[…] At the Antarctica meeting, Chinese officials hope to sign polar cooperation agreements with the United States, Russia and Germany, according to China’s Ministry of Foreign Affairs.

Climate change and the tourist trade also will be on the international delegates’ agenda.

[…] More than 38,000 tourists visited Antarctica and surrounding waters in the 2015-2016 season, a 29 percent increase from a decade earlier, according to the International Association of Antarctica Tour Operators. China accounts for a growing proportion of the visitors. [Source]

Newly released statistics from the International Association of Antarctica Tour Operators note that Chinese visitors to Antarctica increased by 25 percent in 2016-2017, making Chinese tourists the second most plentiful to the region with 12 percent of the known total. The 40th Antarctic Treaty Consultative Meeting will be held in Beijing until June 1.