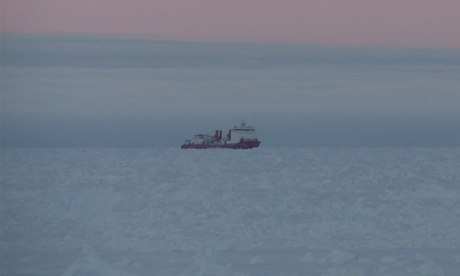 China’s Xue Long (“Snow Dragon”) icebreaker made a solo attempt to rescue an icebound research ship in Antarctica on Friday, but was forced to retreat. The Guardian’s Alok Jha reported from the trapped Akademik Shokalskiy as Xue Long approached:

The Xue Long started cutting through the ice soon after, and has made steady, but slow, progress since and is now within sight of the stricken vessel. The ice it has encountered at the edge has been much thicker than expected – 3-4 metres thick in some places. It is travelling at between 0.1 to 3 knots depending on the density of the ice and should reach the Shokalskiy some time in the next 12 hours. The Astrolabe has not yet entered the ice field. [Xue Long’s captain subsequently told CNN that due to worse than expected conditions, it may take two days to reach the Shokalskiy.]

[…] The Xue Long, which translates as Snow Dragon, was already on its way to help construct the new Chinese Antarctic base near the Ross Sea when it was asked to detour and assist the Shokalskiy. The Astrolabe has been sent from Dumont D’Urville, the nearest Antarctic base to Cape de la Motte. Also on its way to the Shokalskiy, but still a few days’ sailing time away, is the Australian icebreaker, Aurora Australis.

“The Chinese are on a really tight timeframe because they’re building their new base and there is a short Antarctic summer season,” [expedition co-leader Chris] Fogwill said. “Still, there’s been no hesitation to come and help us – we’re very grateful and it’s a big gesture.” [Source]

But Xue Long was later forced to turn around and await reinforcements. From Jha at The Guardian:

An announcement on the ship’s noticeboard broke the bad news: after spending about 12 hours cutting through seven nautical miles of ice, the Xue Long had turned around and headed back towards open water.

“The ice was just too thick, and the Xue Long was making very heavy going. The captain decided the best course of action was to wait for a second icebreaker or a change in weather,” said Chris Fogwill, a glaciologist at the University of New South Wales and a co-leader of the Australasian Antarctic Expedition (AAE). “We need a westerly wind to release the pressure on the pack ice in the area, or we need two icebreakers.”

[…] This 166-metre Chinese ship, whose name means Snow Dragon, will now regroup with the smaller L’Astrolabe, the French vessel sent from the nearby Antarctic base, Dumont D’Urville, which is 18.5 nautical miles from the Shokalskiy. There it will wait for the Australian icebreaker, Aurora Australis, due to arrive in the area on Saturday. [Source]

See also Jha’s other dispatches from the Shokalskiy on the continued research underway and the inclement reporting conditions:

China Daily’s Wang Qian reported last week on the country’s growing Antarctic projects, including the construction of the new base:

China is expanding its presence at the South Pole, with construction workers leaving its Zhongshan Station on Wednesday to build the Taishan summer field camp, the country’s fourth Antarctic base.

Site inspections for another research station will also be carried out at Antarctica’s Victoria Land during a 155-day expedition launched on Nov 7.

[…] “As a latecomer to Antarctic scientific research, China is catching up,” Qu Tanzhou, director of the State Oceanic Administration’s Chinese Arctic and Antarctic Administration, said in an exclusive interview.

[…] Wang Yong, director of science programs for the Chinese Arctic and Antarctic Administration, said the [Taishan] base will also be used to study geology, glaciers, geomagnetism and atmospheric science. [Source]

Two years ago, the International Association of Antarctic Tour Operators didn’t even list China in its statistical overview of tourists. An estimated 2,328 Chinese citizens travelled to the Antarctic, which includes the continent of Antarctica, in last year’s travel season, which usually runs from November to March, according to the association’s data.

Over the last three years, the increase in Chinese tourists to the Antarctic had only been constrained by the scarcity of tickets, as agencies were unable to meet demand, said Hu Huamin, chairman of Beijing-based travel consultancy DPS.

He said he expected a steep increase in tourists as agencies recognised the public interest. “This reflects a growth trend in Chinese tourism,” he added, as more wealthy Chinese tourists were ready to spend more on extravagant trips. “Chinese tourists are now seeking extremes.” [Source]