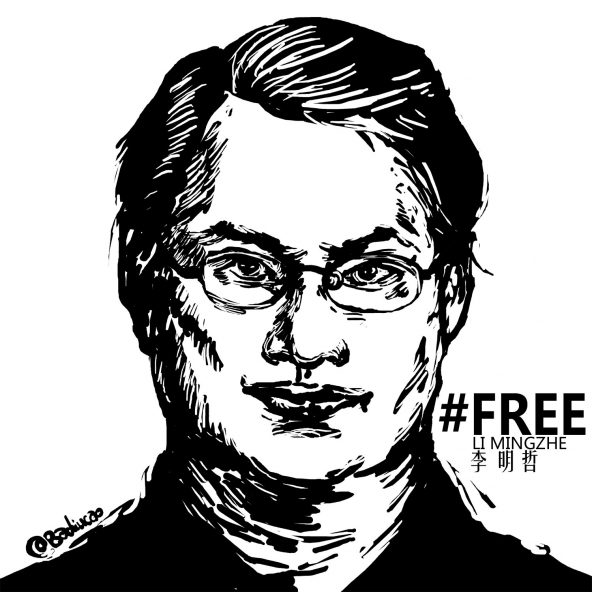 Taiwanese activist Lee Ming-che was sentenced to five years in prison for subverting state power by a Hunan court on Tuesday, more than two months after what his wife dismissed as "a stage trial." Lee disappeared in March while entering China via Macau, and was later confirmed to have been detained by Chinese authorities. Xinhua described the political conspiracy in which Lee was accused of participating:

Mainland resident Peng Yuhua was sentenced to seven years in prison on the same charge.

The two men were both deprived of their political rights for two years. They said they would not appeal.

Lee’s supporters have questioned this account, regarding Peng, in the words of The New York Times’ Chris Horton, as "a prop used to create the appearance of Mr. Lee’s conspiring with a Chinese citizen to sow discord in the authoritarian state."

AFP’s Joanna Chiu and Amber Wang reported reactions to the sentencing from Taiwan’s government and Lee’s wife, Lee Ching-yu. Lee, a historical researcher focused on political repression in pre-democratic Taiwan, has become an outspoken advocate for her husband since his detention, sometimes as part of an emerging coalition of other political detainees’ relatives. Her early efforts to travel to China seeking information on Lee Ming-che’s case were blocked by Beijing, but she was able to attend both the trial and sentencing.

His wife, Lee Ching-yu, who attended the sentencing, said her husband had "paid the price" for his ideals.

"Fighting for human rights for the disadvantaged is a commitment that must be made to push for the enhancement of human civilisation… I want to express again that I am proud of his dedication," she said in a statement.

"We urged the Beijing authorities to release Lee and allow him to return to Taiwan soon. We regret that Lee’s case seriously damaged cross-strait relations," the presidential office said in a statement. [Source]

The case’s impact on already tense cross-strait relations has been the focus of intense scrutiny since it began. In April, NYU legal scholar Jerome Cohen warned that "if cross-strait agreements can be brushed aside by Beijing when considered politically inconvenient, they will no longer be trusted in Taiwan." Taipei mayor Ko Wen-je commented that "the Chou Tzu-yu incident probably scared off half of Taiwanese, while the Lee Ming-che incident scared off the other half."

So is it China's goal to make average Taiwanese hate China?
https://t.co/cHLRmpCIQw

Taiwanese don't need to hate China to not want anything to do with unification. Chinese negations of the liberal democratic values that Taiwanese have internalised as a crucial part of "being Taiwanese" concretizes the psychology of separation https://t.co/RKoKii0rwb

Deteriorating cross-Strait relations is not the only variable in play here- certainly it had a role in the decision to go after Lee, but it has to be situated in the broader constriction of social space that is being driven by domestic "imperatives" https://t.co/ORIMeSpwB6

Lee’s case has agitated broader anxiety about Beijing’s efforts to extend the reach of this constriction both to Taiwan, which it claims as its own territory, and beyond. The use of past online postings in evidence may cast a particular chilling effect on those intending to travel to China, as Chris Horton reported at The New York Times:

Of special concern is Facebook. The Yueyang court alleged in September that Mr. Lee and his co-defendant, Peng Yuhua, a Chinese citizen, had used the social networking site to plan protests in China. Taiwan has one of the world’s highest Facebook penetration rates, while China’s government has blocked the site.

Yibee Huang, the chief executive of Covenants Watch, an alliance of human rights organizations in Taiwan, described a “chilling effect” on Facebook use by friends and associates since Mr. Lee’s trial. Mr. Lee had previously volunteered at Covenants Watch.

Facebook has long been a popular forum for lively political debate among young Taiwanese, many of whom work or expect to one day work in China. Now, however, many young Taiwanese suspect that China is watching what they post, Ms. Huang said.

“They will now strongly self-censor; there are topics that even while in Taiwan they won’t discuss,” she said. “I think this is extremely harmful to Taiwan’s democracy.” [Source]

The court’s suspension of Lee’s political rights is no doubt meant to underscore Beijing’s contention that the new National Security Law applies to Taiwanese nationals (whom it regards as PRC citizens) regardless of where the alleged crimes are committed. We should note here that the said crimes Lee is accused of having committed occurred primarily online.

The heavy sentence is also meant to send a loud signal to other activists in Taiwan, Hong Kong and elsewhere that they, too, can now be apprehended and convicted for “crimes endangering national security” and the “people’s democratic dictatorship regime” as (loosely) defined in the Law, irrespective of where the said crimes have been committed, both physically and online. This development will no doubt have a chilling effect on activists, academics, journalists, officials and artists who may fear that they have, at some point, promoted through their work or personal discussions online notions of democracy or sovereignty that can be construed as criminal in China.

[…] More than the unfair treatment of a man who did nothing wrong, today’s sentencing is yet another reminder that China has no intention of playing by international rules. It is also a warning that it has now cast a much wider — and extraterritorial — net in its attempt to silence critics and those, Chinese and not, who propose an alternative, more liberal and democratic system of governance in China. [Source]