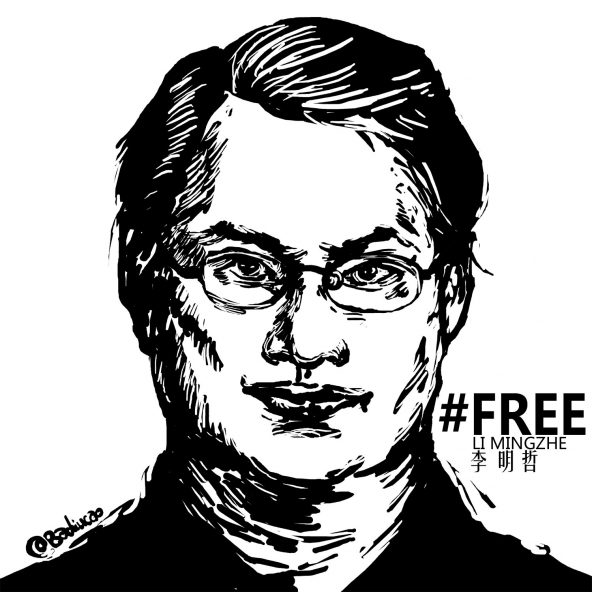 At The New York Review of Books, Richard Bernstein focuses on Lee Ching-yu, whose husband, Taiwanese activist Lee Ming-che, disappeared while entering China in March. Chinese authorities subsequently acknowledged that he had been detained, and later formally arrested him for subversion. Lee Ching-yu has steadfastly pursued information about her husband’s case, first announcing plans to travel to Beijing. When this trip was blocked, she joined the wives of several detained Chinese lawyers to testify in front of a U.S. congressional committee.

Mr. Lee […] is like other political prisoners in China, a man stripped of rights, facing in solitary fashion the organized power of the Chinese state, but he is also different because he is from Taiwan. He is in fact the only Taiwanese ever to be charged with subversion of state power, and this imparts a special meaning to his case. As it happens, Ching-yu, his wife, is an authority on what’s called the “White Terror,” the brutal, martial-law repression of dissent that took place on Taiwan from roughly 1947 to the 1980s, by which the ruling Nationalist Party, or Guomindang, attempted to crush the agitation for greater freedom that was being carried out by young Taiwanese, agitation that was essential in Taiwan’s eventual transformation into the multiparty democracy it is today. For the past fifteen years, Ms. Lee has worked for the Shih Ming-teh Foundation in Taipei, named for a prominent, formerly imprisoned Taiwanese dissident—he spent roughly twenty-five years in custody—which has published documentary collections on the White Terror as well as photographic histories of the eventually successful pro-democracy movement.

Given the lack of information from the mainland, it can’t be said for sure that Lee’s previous dissemination of this information was the reason for his arrest. Over the years he’d also helped raise money for the families of some of the human rights lawyers jailed in China. But it’s hard to imagine that his exchanges on Taiwan’s democracy over the years played no part in the authorities’ move against him. Given the intensifying repression in China that has characterized the regime of President Xi Jinping, publicizing Taiwan’s political evolution, suggesting it as a model for China, and presenting formerly imprisoned dissidents as heroes, seems to have been beyond what the mainland authorities were willing to tolerate.

[…] “This is Taiwan’s past,” she said, gesturing toward the volume of secret police files on a low table in front of her. “This is what I’ve studied. China is like what Taiwan was forty years ago. This has made me know what I should do and how I should act.” [Source]

Bernstein notes that Beijing’s handling of the case violates the Cross-Straits Joint Crime-Fighting and Judicial Mutual Assistance Agreement signed in 2009. In April, NYU legal scholar Jerome Cohen warned that "if cross-strait agreements can be brushed aside by Beijing when considered politically inconvenient, they will no longer be trusted in Taiwan." Taipei mayor Ko Wen-je commented that "the Chou Tzu-yu incident probably scared off half of Taiwanese, while the Lee Ming-che incident scared off the other half."

While Lee Ching-yu’s advocacy has linked her husband’s case to those of the Black Friday lawyers, that of recently deceased Nobel Laureate Liu Xiaobo offers another widely noted parallel. Liu died in hospital last month while serving an 11-year sentence for the similar (but not identical) crime of inciting subversion. Chris Horton noted the resonance of Liu and Lee’s cases The New York Times last month:

Hours after Mr. Liu’s death, Taiwan’s state-owned Central News Agency reported that the governing Democratic Progressive Party had issued a statement calling on China to release Mr. Liu’s widow, Liu Xia, who was placed under house arrest in 2010, as well as Mr. Lee.

Comparing the plights of Mr. Liu and Mr. Lee, a commentary this month in a Taiwan newspaper, Liberty Times, asked: “Will Lee Ming-cheh be the next Liu Xiaobo?”

“What’s similar is that Lee Ming-cheh and Liu Xiaobo were both [sic] arrested for the crime of ‘subversion of state power,’” it said. “What’s different is that Liu Xiaobo is Chinese, whereas Lee Ming-cheh is Taiwanese. After Lee Ming-cheh entered prison, will he ‘get sick’ or be forcefully ‘sickened’? This deserves attention.”

Nongovernmental organization workers from Taiwan who travel to China should remain on a high state of alert, the commentary added. “You absolutely do not want to become the next Lee Ming-cheh,” it said. [Source]

On Thursday, Lu Yi-hsuan and Jake Chung reported at The Taipei Times on the next steps for Lee Ching-yu and her husband’s other supporters:

The working group is a five-member organ established by the UN Human Rights Commission. Its next session is to be held in Geneva, Switzerland from Sept. 11 to Sept 15.

[…] Several non-governmental organizations in Taiwan would be establishing a joint taskforce on Tuesday next week to provide long-term support in the case, Chiu said.

In addition, a source said that the government late last month held an official meeting with Lee Ching-yu to formulate an official national policy on how to bring Lee Ming-che back home.

The attending agencies included the Ministry of Foreign Affairs, the Mainland Affairs Council and the Ministry of Justice, the source said, adding that the meeting gave relatives the sense that the state is finally involving itself in the case. [Source]