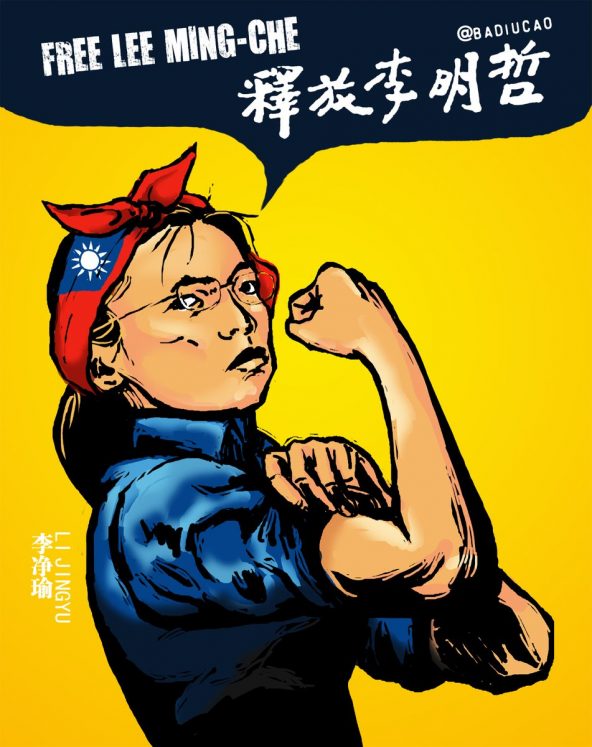 Last month, Taiwanese activist and NGO worker Lee Ming-che was tried on charges of subversion after being detained in March while entering China. The trial, which Lee’s wife called a “stage drama,” confirmed fears in Taiwan that Chinese law could be used to prosecute Taiwanese who work on issues relating to human rights and democracy in China. Furthermore, the vague definition of “subversion” under Chinese law could be used to include a wide variety of activities which are permitted in Taiwan, including online activism. David Green reports for News Lens on the impact Lee’s case is having on activists in Taiwan:

This nebulous definition and its arbitrary application in Lee’s case has caused considerable alarm. NGO observers were particularly taken aback by prosecutors’ focus on Lee’s online activities, notably his attempts to promote democratic ideas on web forums and through instant messaging services. The proceedings suggest that whatever a user says on any social media, wherever they might be – in this case a highly politicized and open democracy like Taiwan – could be interpreted as subversion in China.

“We really were shocked when the prosecutor charged him via FB posts,” said CW’s Huang. “Most of the evidence submitted took place here in Taiwan. We are increasingly scared. There is a chilling effect.”

“More and more Taiwanese NGOs are afraid that what we say or do on Twitter and Facebook will be a crime in China,” added Chiu E-ling (邱伊翎), secretary general of the Taiwan Association for Human Rights (TAHR). “We are worried that if we enter HK or China we will be arrested by the PRC police.”

The evidence has also prompted NGOs in Taiwan to take more precautions around cyber security. [Source]

At the South China Morning Post, Jerome A. Cohen and Yu-Jie Chen write that with his trial, the Chinese government is treating Lee much as Chinese activists have been treated, by being forced to “confess” and to blame “hostile foreign forces” in a highly staged trial that is broadcast on state TV:

Yet the trial was webcast, so that Lee – the first Taiwanese to be ­convicted of human rights activity in China – could be seen confessing to participating in a “criminal ­organisation” that incited web users to spread articles that “vilified and defamed China’s socialist system”.

[…] Lee’s understandably pathetic televised statement came as no surprise. Indeed, his Taiwanese wife, Lee Ching-yu, had publicly anticipated it, based on the experiences of many mainland activists and lawyers detained incommunicado for their human rights activities.

They are increasingly forced to publicise “confessions” and openly voice remorse and gratitude to the Chinese regime. This has become a commonplace ritual in Chinese court and even on TV, long before trial.

Despite the Supreme People’s Court’s recent endorsement of “trial-centred justice” rather than traditional pre-trial decision-making for politically sensitive trials, a Chinese courtroom is not a place that objectively examines a case on its merits; it is a showroom, displaying the defendant’s guilt as a deterrent to audiences at home and abroad. Although China’s leaders seldom refer to the continuing ­influence on their system of the now discredited Soviet model, their current show trials recall the infamous ­Stalin purge trials of the 1930s. [Source]

Last month at The New York Times, Steven Lee Myers and Chris Horton wrote about Lee’s case as part of a larger effort by the Chinese government, “to extend the reach of its security forces to stifle what it perceives as threats to its power emanating from overseas.” Such efforts were seen in the detention of five Hong Kong booksellers and publishers in 2015 as well as the detention and expulsion of Swedish human rights worker Peter Dahlin. New laws on national security, intelligence, and foreign NGO management could also potentially be used to criminalize activities conducted outside China’s borders or by foreigners in China.

In China, discussions of Lee’s case have been curtailed, and a QQ chat group was shut down by authorities after it discussed his trial, according to RFA. Lee Ching-yu has been denied permission to visit her husband since his trial. No verdict in his case has yet been announced.