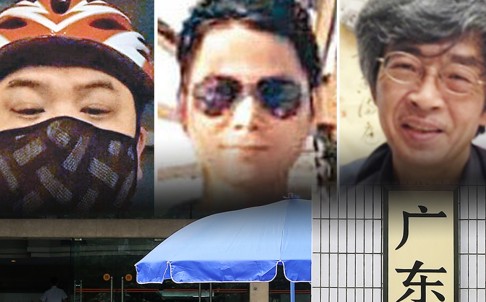 Police in China have confirmed that they are holding three of the publishers and booksellers who had earlier disappeared from Hong Kong. Two of their colleagues—Lee Bo and Gui Minhai—are also in police detention after disappearing from Hong Kong and Thailand, respectively. From Reuters:

The three men – Lui Por, Cheung Chi-ping and Lam Wing-kee, who were linked to the Causeway Bay Books shop – had had “criminal compulsory measures” imposed on them, Chinese police in the southern province of Guangdong told Hong Kong police.

This was the first indication by mainland Chinese authorities as to the fate of the three since they were reported missing last November. No other details of their location or condition were given.

Hong Kong police referred to the letter from the Chinese police in a statement, but did not make it public in full.

Two other Hong Kong booksellers who also disappeared, Gui Minhai and Lee Bo, are believed to have been abducted or coerced from Thailand and Hong Kong respectively, and taken to China, according to foreign diplomats. [Source]

Meanwhile, Hong Kong police said they had reached out to Lee Bo to try to meet him, but he turned down the offer, Danny Mok and Stuart Lau report for The South China Morning Post:

They enclosed a letter from Lee stating that relevant authorities had informed him of a request by Hong Kong police to meet with him on the mainland. He wrote that he “did not need to meet with them at the moment” and would contact them if he wished to do so. Lee’s wife confirmed his handwriting when she was shown the letter.

Hong Kong police last night said they had written again to the Guangdong side requesting help in following up the case of Lui, Cheung and Lam, and asking them to pass on a message to Lee that police still wanted to meet with him as soon as possible.

The latest development is unlikely to curb speculation in Hong Kong that the booksellers were kidnapped and taken to the mainland by security agents from across the border acting beyond their jurisdiction. [Source]

In The South China Morning Post, Phila Siu and Oliver Chou profile the five men and the roles they each played in the publishing business, Mighty Current, which is known for its salacious titles about Chinese politicians:

It turns out that Causeway Bay Books was originally owned by Lam, who later handed it over to Mighty Current, the publishing house of which Gui Minhai, Lui Por, and Lee Po’s wife, Sophie Choi ka-ping, are registered shareholders.

A friend of Lam told the Post that he was a “super book lover” who would go the extra mile to re-publish books and try to gain wider audiences for them.

“Lam was the boss of Causeway Bay Books, and he ran the shop with his wife, who answered all phone calls. But they couldn’t afford the rising rent and at one point planned to move and offered me the spare bookshelves,” recalled Caroline Chan of Sam Kee Book Company, a basement bookstore in Fortress Hill.

“But after a while he told me there was no need to move as the shop was bought by Mighty Current, and so he worked there as an employee,” she added. [Source]

The Mighty Current publishing house was known for its tabloid-style books focusing on the private lives of China’s leaders. Such publications had become popular among tourists from mainland China in recent years, as publishers took advantage of the “one country, two systems” policy to produce books that would be banned in China. Michael Forsythe and Andrew Jacobs report for The New York Times about why Mighty Current may have been targeted in the crackdown and what the impact has been in Hong Kong:

The precise motive of the disappearances is still unknown. Several prominent people in the industry and a political insider who often deals with mainland officials say the publishers were most likely spirited away by zealous security officials intent on guarding Mr. Xi’s reputation, though not necessarily with his knowledge.

“In the name of maintaining Xi Jinping’s authority, they are unscrupulous,” said Ho Pin, founder of the Mirror Media Group, which is based in New York and which also publishes the gossipy Chinese-language books that are sold in Hong Kong. “Those who nabbed Mighty Current’s people are of this sort.”

For Hong Kong, the stakes are bigger than the sales of some juicy airport paperbacks. Many worry about mainland China’s deepening influence in a city where people’s civil liberties, including freedom of speech and assembly, are enshrined in the Constitution. Four of the missing book publishers are Hong Kong residents.

“It may have already triggered a chilling effect on the community, especially the publishing community,” said P. Y. Lo, a council member of the Hong Kong Bar Association and an expert on the city’s Constitution. “That is not a good sign at all.” [Source]

The detentions of the publishers appear to have added to recent concerns about Chinese security overstepping their role in carrying out detentions outside their jurisdiction.

Correction: this post’s title originally stated that the publishers had been criminally detained. Human rights researcher Joshua Rosenzweig points out on Twitter that it is “not clear they’ve been placed under criminal detention … ‘coercive measures’ includes other measures.”