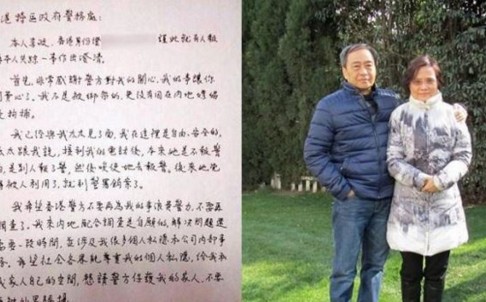 Last week, Chinese authorities confirmed to Hong Kong police that they were holding Hong Kong resident Lee Bo in custody, following widespread concern that Lee had been kidnapped from the territory and brought to Shenzhen. Lee works with a publishing house and associated bookstore that sell politically sensitive titles; four of his colleagues have also disappeared in recent months. From Rishi Iyengar at TIME:

A statement from the police said that the Interpol liaison office of China’s Guangdong Provincial Public Security Department had informed them that Paul Lee, also known as Lee Bo, was in their custody.

The revelation strengthens local suspicions that Lee, a British citizen who disappeared in early January, was snatched from Hong Kong by mainland Chinese authorities in flagrant violation of Hong Kong’s autonomy. The case has attracted widespread international attention amid concerns that Beijing is widening is dragnet to harass and detain dissidents beyond mainland Chinese borders. [Source]

A report by Michael Sheridan at Sunday Times (paywalled) says that a leaked Communist Party document reveals government “measures to ‘exterminate’ banned books and magazines at their source, identifying 14 publishing houses and 21 publications in Hong Kong as targets.”

Soon after the police revelation, Lee’s wife, Sophie Choi, revealed that she had met with Lee at a secret location in mainland China, and had delivered a message from him to Hong Kong police. Clifford Lo, Jeffie Lam, Jennifer Ngo report for the South China Morning Post:

Almost a week after the Hong Kong police wrote to the Guangdong Provincial Public Security Department requesting a meeting with Lee, Choi alerted the police on Saturday night that she had met her husband, who was “assisting in an investigating as a witness” at a mainland guest house.

“According to Mrs Lee, Lee Po was healthy and in good spirits, and said that he was assisting in an investigation in the capacity of a witness,” a police statement released at 2.07am yesterday morning said, adding that the wife did not reveal details of the venue.

[…] Lee also passed on a letter to police via his wife, in which he said he was “safe and free” and urged law enforcers to stop investigating his case. [Source]

According to the same SCMP report, the text of the letter reads in part:

I have already met with my wife. Over here I am free and safe. My wife told me, after she received my phone call she did not intend to call the police. It was others that reported to the police, and incited her to report to the police. After that, she felt used and went to the police station to close the case.

I hope the Hong Kong police will not continue to waste police resources on my case, and there’s no need to continue investigating. I went to the mainland to co-operate in an investigation voluntarily. Solving a problem takes some time, it involves many of my private and company’s internal affairs, I hope all sectors of society can respect my personal privacy, and give my family and I some personal space. I earnestly request the police to protect my family, and not allow them to come under further outside harassment. [Source]

Gui Minhai, one of Lee’s colleagues at Mighty Current publishing house, reportedly turned himself in to Chinese police last week for involvement with a decades-old hit-and-run accident, after disappearing from his vacation home in Thailand. Gui is a Swedish citizen. CCTV aired a public confession by Gui, though many believe his confession was coerced and that he did not travel to the mainland freely. Three of Gui and Lee’s colleagues remain missing.

Several Hong Kong publishers publish titles about China’s leaders past and present in an effort to appeal to readers from the mainland, where such books are banned. The crackdown on Mighty Current is impacting the publication and sales of such books. A planned book by exiled writer Yu Jie, which included a critical take on Xi Jinping’s presidency, was cancelled by his publisher, Open, earlier this month.

Publishing these kinds of books seems increasingly sensitive with the recent kidnappings of employees of a Hong Kong publisher. Are you worried you’ll be next?
They’re in a different business. They’re selling a product, and whatever sells they’ll sell. I was irritated by the media because they kept grouping all independent publishers together in one “banned books” category. But booksellers just publish whatever they want [without regard to facts]. Truth and fabrication are different.

[…] You’ve been publishing fewer books in recent years. Last year, you published only three books. Why have you scaled back?
The main problem is the new generation doesn’t want to know. They don’t know about the Mao era or who Deng was. Another big problem is there aren’t interesting manuscripts.

Why?
The hongerdai [the “second red generation”—the children of the founding generation of Communist leaders] are liberated under Xi Jinping. In the past they had grievances, but now they feel that this is the best time for their interests: “We don’t want to rock the boat.”

[…]What about memoirs of the Cultural Revolution? I don’t mean famous people but common people, what they experienced in those times, when millions were killed, sent into exile, beaten, and tortured.
Unfortunately they’re not very interesting. Everyone feels he was a victim. If you look at them, you wonder, What the fuck were you doing in that situation? It was everyone else’s fault? You can’t blame everything on Mao. He was responsible, he was the mastermind, but in order to reach that level of social destruction—an entire generation has to reflect. But they all say they were victims.