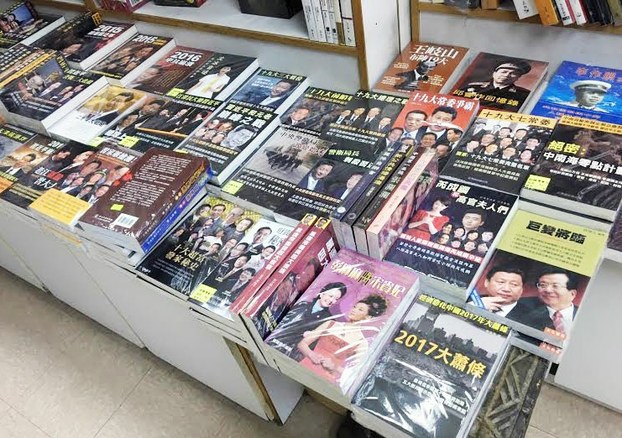 The Guardian’s Ilaria Maria Sala reports that four men who work for a Hong Kong publisher known for producing sensational titles on high-ranking CCP leaders are missing after traveling outside of Hong Kong:

Gui Minhai, the Swedish owner of Sage Communications, was last seen after he travelled to his holiday home in Thailand, while Lu Bo, the company’s general manager, and Zhang Zhiping, another employee, have not been heard from since they went to visit family members in mainland China.

Lin Rongji, the manager of Sage Bookshop, has also disappeared, although his whereabouts are not clear, according to a report from Radio Free Asia, the US-funded news group.

[…] One member of the publishing industry, who requested anonymity for fear of reprisals, said: “The people behind Sage Communications have long been hated by the princelings, absolutely hated, because their books are so sensationalistic.

“They have been going to former mistresses asking them to write autobiographies, and in many cases they have also published made-up life stories of prominent politicians. But what is happening to them is a huge problem: they have been operating for years with no problems, but now the bookstore is getting into trouble and the people are getting into trouble.” […] [Source]

Human Rights Watch’s Maya Wang is quoted by The Guardian expressing special concern about Chinese officials pressuring Southeast Asian government’s to hand over dissidents, and about a wider crackdown on free expression in Hong Kong.

Reporting last week on the missing publishers, Radio Free Asia provided context on recent moves by Beijing to shore up control over publishing in the semiautonomous region:

Earlier this year, Beijing’s representative office in Hong Kong bought up a key publishing house in the city, sparking fears of a widening ideological assault on freedom of expression in the former British colony.

The Liaison Office of the Central People’s Government in Hong Kong, which formally represents Beijing in the semiautonomous city, recently acquired control of Sino United Publishing.

The move gave Beijing control of more than 80 percent of the publishing industry in Hong Kong, which was promised a high degree of autonomy and the continuation of its existing freedoms under the terms of the city’s 1997 handover to China, media reports said.

Last month, The New York Times’ Michael Forsythe and Crystal Tse reported on how political books are becoming increasingly hard to find in Hong Kong as Beijing’s influence over the media becomes stronger and as publishers exercise more self-censorship:

The market for books on Chinese politics, which have long been a fixture in Hong Kong bookstores that cater to mainland visitors, has fallen on hard times. Interviews with booksellers and publishers say that market forces — rising rents and the advent of e-books — play a part. But so does Mr. Xi’s government, which is increasingly intolerant of any dissent and has warned Chinese tourists that they risk being punished if they return from Hong Kong or Taiwan with banned political books.

[…I]n 25 Hong Kong bookstores, including 14 under the Sino United umbrella, a pattern is noticeable. In the Sino United stores, banned books, if they are available at all, are difficult to find, often in the back of stores. At stores owned by other companies, the books are more prominently displayed.

[…] One of the biggest publishers of banned political books in Hong Kong, Ho Pin, founder and chief executive of the Mirror Media Group, says the real problem is not the Chinese government, but self-censorship by Hong Kong’s news media elite as they cozy up to Beijing.

[…] “No one took away Hong Kong’s media freedom,” Mr. Ho said. “Hong Kong’s people gave it up themselves. We’ve never been exposed to direct pressure from authorities. What we worry about is lacking the ability to attract readers.”

Yet there is evidence that indirect pressure — in the form of scaring off potential mainland buyers — is having an effect. […] [Source]

Read more about Hong Kong media or concerns over Beijing’s influence on the global publishing industry, via CDT.