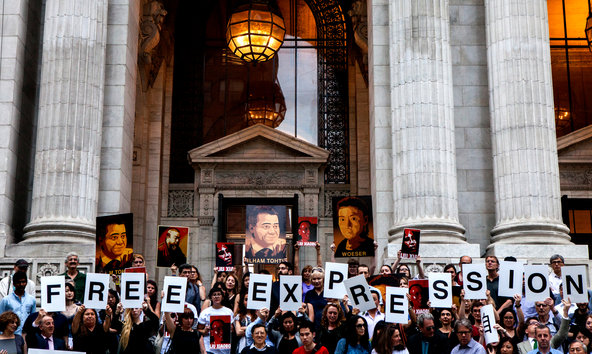 With the 68th annual Frankfurt Book Fair, the world’s largest gathering of the publishing industry, underway, 12 American publishing companies have signed a PEN American Center pledge to address censorship in Chinese translations of foreign works for the mainland market. From PEN’s press release:

As the International Publishers Association prepares to announce the acceptance of China as its newest member during the Frankfurt Book Fair, twelve U.S. publishers have signed onto a PEN American Center pledge to monitor and address incidents of censorship in Chinese translations of books by foreign authors.

Signed by Archipelago Books, Beacon Press, Graywolf Press, Grove Atlantic, Hachette, Macmillan, New Directions Press, OR Books, Other Press, Penguin Random House, W.W. Norton, and Workman, as well as the Association of American Publishers International Freedom to Publish Committee, the pledge affirms a commitment to assess whether any book for which the publisher controls Chinese publication rights includes political or historical content known to be censored in China, and to work with authors and trusted Chinese editors to minimize excisions and changes in the translation. [Source]

The pledge can be read in full via PEN. Earlier this year, PEN released a report on the censorship of foreign authors’ works when translated for the Chinese market, which included recommendations for those looking to publish there. That report came ahead of the 2015 BookExpo America, where China was honored as the guest of honor. PEN’s report did much to stoke conversation about weighing the appeal of China’s enormous book market with the government censorship required for entry.

The New York Times’ quotes publishers, authors, and PEN executive staff on the pledge in light of the state-sanctioned Publishers Association of China’s recent admittance to the International Publishers Association, which was announced at the Frankfurt Book Fair this week. The IPA is an organization that “promotes and defends [the] freedom to publish, a fundamental aspect of the human right to freedom of expression.” Amy Qin reports:

“This is something that we need to stand up to,” said Morgan Entrekin, the president and publisher of Grove/Atlantic, speaking by telephone from Frankfurt. “Particularly on the occasion of China being invited into the I.P.A., we need to set standards for the future so that mainland Chinese publishers can say to whoever is making decisions there that these are the standards that we need to adhere to.”

[…] “The show of leadership on the part of the publishers will be catalytic,” said Suzanne Nossel, executive director of PEN American Center, speaking by telephone from New York. “China represents a very large and important market for publishers and I think given the size of the population, the pace of urbanization and the rising levels of education, it’s a tremendous long-term market opportunity for them.”

“At the same time, it’s also clear that this is an issue of principle, and these are values of freedom of expression that these publishers have built their businesses on,” she added.

There remain, however, financial considerations.

“I’m curious to know if the U.S. publishers are willing to dedicate any resources to this issue,” said Peter Hessler, a writer for The New Yorker, in emailed comments. “In the end, this issue is economic as well as political.” […] [Source]

In March, Hessler and Evan Osnos discussed the complexities involved in deciding to (or not to) publish translations of their work in China at The New Yorker (via CDT). Also see Hessler’s “Travels With My Censor” at The New Yorker.

The Guardian’s Alison Flood reports that an upcoming book by artist Ai Weiwei, to be released by English publishing house The Bodley Head, was announced at the Frankfurt Book Fair.

Announcing its deal for Ai’s book at the world’s largest gathering of the publishing industry, The Bodley Head said it would be “an extraordinary cultural history of China over the past one hundred years”. It will be told through both Ai’s own life story, and that of his father, the poet Ai Qing, who was both an early intimate of Mao Zedong, and later sentenced to hard labour in the Gobi desert after being branded a rightist. The book will be published in spring 2017.

“I live in a totalitarian society (so did my father), which denies human freedom and values. Eliminating individual memories is an important method that authorities use to control people’s thinking. Therefore, such political culture has made it extremely difficult to write down one’s memory or those of a family,” said Ai. “I write about my father, his generation, and my own experience, our struggle for individual freedom and self-expression in this old society.” […] [Source]