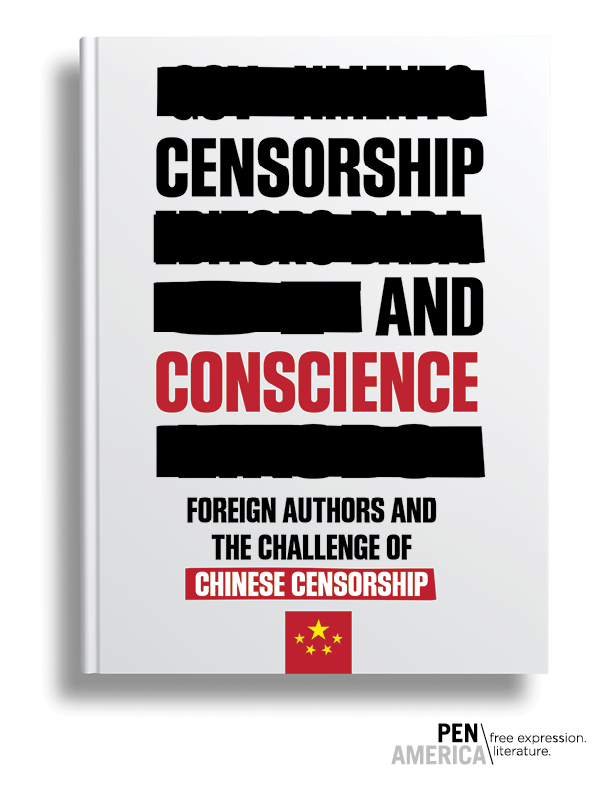 Free expression and literacy advocacy group PEN America this week released the report “Censorship and Conscience: Foreign Authors and the Challenge of Chinese Censorship.” The study, written by journalist Alexa Olesen, looks at how foreign authors are navigating China’s heavily censored and rapidly growing publishing industry, and offers a set of recommendations for those looking to publish in the PRC. AP summarizes the report’s findings:

A report on Wednesday from the PEN American Center says translated versions of foreign books may be expurgated because of political sensitivities about such topics as Taiwan, Tibet and the 1989 Tiananmen Square crackdown on democracy protesters. But sexually explicit material and references to gay and lesbian issues are also frowned upon.

The report intends to draw attention to how such censorship could affect writers outside China as it takes an increasingly prominent place in the global publishing industry. China will be the regional focus of this year’s BookExpo America in New York next week, with a delegation of hundreds of state writers and publishers.

[…] The report says that in many instances, foreign authors and their agents and publishers do not know enough about the workings of Chinese censorship to ensure books aren’t censored. Many have signed contracts that promise the preservation of the author’s original content but they leave the translation to the Chinese publisher and fail to vet the resulting copy. Other authors consent to some censorship, reasoning that even in diluted form, getting new ideas into China will help the cause of free expression.

[…] PEN said it interviewed dozens of authors, publishers and literary agents in the United States, China, Taiwan, Australia and Europe for the report. It says that as book advances and royalty payments rise in China, there are serious concerns about the kind of compromises foreign authors and publishers may make and the impact this can have on free expression. [Source]

The PEN report notes (pg. 13) that references to jailed writer and dissident Liu Xiaobo (and PEN’s efforts to advocate on his behalf) were removed from the 2014 Chinese edition of Paul Auster’s 2010 novel “Sunset Park.” The New York Times’ Chris Buckley reports:

The mainland Chinese edition of the novel, published late last year, left out the main parts about Mr. Liu’s case, and remaining mentions of Mr. Liu and China were replaced by cryptic, almost Auster-esque references to “L” and “country C.” In reality, Mr. Liu was sentenced to 11 years in prison in 2009 and was awarded the Nobel Peace Prize in 2010. His wife, Liu Xia, who is also mentioned in the original version of the novel, and appears in the Chinese edition as “L’s wife,” lives in heavy isolation under informal house arrest.

“Well, I live in the world I write about,” Mr. Auster, who has supported PEN American’s efforts to secure Mr. Liu’s freedom, said in a telephone interview.

“I’m not even blaming the publisher,” he said. “I understand the pressure they’re under, and if they had taken a stand and printed those pages, they probably would have been shut down.” […] [Source]

Meanwhile, as writers weigh commercial prospects against the potential cuts that may be required to access the Chinese market, Li Keqiang is taking successful Chinese authors with him to Columbia in hopes of boosting Chinese soft power reserves in Latin America:

[…] “The export of literature is the export of the spirit and ideology that will affect others’ indigenous culture and way of thinking,” the [People’s Daily] article said. “Li’s trip is just the first step.”

[…] Beijing has ramped up public diplomacy efforts in recent years as the leadership fears its foreign affairs initiatives have led to misperceptions at home and abroad. [Source]