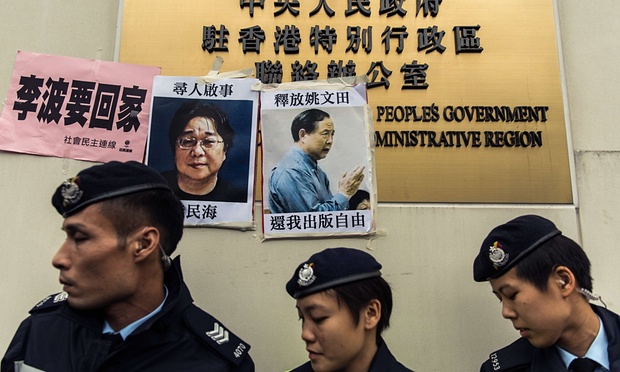 The British government is seeking more information about the disappearance of Lee Bo, the Hong Kong-based publisher and bookseller who is currently believed to be in police detention in Shenzhen. Lee holds a British passport. From Tom Phillips and Ilaria Maria Sala at The Guardian:

“These people have gone missing – Mr Lee Bo, who is a British passport holder, has gone missing – and we have urgently inquired both of [the] Hong Kong authorities and of the mainland Chinese authorities what, if anything, they know of his whereabouts,” [Foreign Secretary Philip Hammond] told a press conference in Beijing.

Asked whether he was concerned about claims that Chinese security agents were behind Lee’s apparent abduction, Hammond replied: “I think, if I may, you are speculating a little bit about what has happened.”

China has so far refused to comment directly on the five disappearances. But the Chinese foreign minister, Wang Yi, speaking alongside Hammond, appeared to confirm his government’s involvement in Lee’s disappearance for the first time.

Asked about the missing bookseller’s situation, Wang said: “On the specific case you mentioned … based on the basic law of Hong Kong and China’s nationality law, the person in question is first and foremost a Chinese citizen.” [Source]

According to Hong Kong and Chinese law, “All Hong Kong Chinese compatriots are Chinese nationals, whether or not they are holders of the ‘British Dependent Territories Citizens passport’ or ‘British National (Overseas) passport.'” It is not clear what type of passport Lee holds, though he is reported to have a special travel permit, which is required of Chinese citizens who reside in Hong Kong and travel to the mainland. Lee reportedly traveled to Shenzhen without passing through the normal immigration process.

Meanwhile, Lee’s wife has tried to cancel a missing persons report for her husband, after seeing a letter allegedly written by Lee in which he says he traveled to Shenzhen voluntarily. From James Pomfret and Rain Liang at The Australian:

Lee Bo, 65, a shareholder of Causeway Bay Books, went missing last week, amid mounting speculation he may have been taken by Chinese agents. His wife, Sophie Choi, however, withdrew a missing persons report for her husband, a British passport holder, on Monday.

“He went voluntarily so that’s why … I cancelled the report,” Chao (sic) said in brief comments on Tuesday.

Hong Kong police confirmed in a statement that the missing persons report had been cancelled, but said they would continue investigating. [Source]

BBC has more on the letter:

In it, Paul Lee [Lee Bo] appears to be taking responsibility for leaving Hong Kong. And he implies he will be staying in mainland China for some time.

The activists believe the letter was indeed written by Mr Lee, but under instruction from whoever is holding him.

[…] She had said his return permit, which Hong Kong citizens must show to enter China, was still at home – seen by some as evidence he may have been abducted.

But in the letter dated Sunday, which was said to have been faxed to his colleague, Mr Lee says he had “returned to the mainland using my own methods”. [Source]

A photo and transcript of the letter is available via Bowen Press: 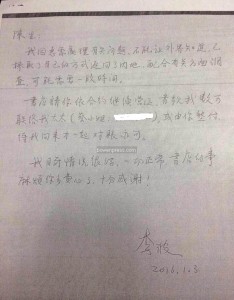 On the University of Nottingham’s China Policy Institute’s blog, Jackie Sheehan writes that Lee’s disappearance and the possible cross-border police action are in step with other recent detentions, including that of Lee’s colleague Gui Minhai:

It is how Mr Lee got to Shenzhen that has provoked fear and outrage in Hong Kong at the prospect that Chinese police took him across the border illegally. Two of Mr Lee’s colleagues in the publishing company and its Causeway Bay Books store, Lu Bo and Lin Rongji, disappeared while in Shenzhen in October 2015, while a third, Zhang Zhiping, vanished from Dongguan, and the company owner, Gui Minhai, disappeared from his holiday home in Pattaya, Thailand, within the same seven-day period. Gui is a Swedish national, and reportedly has the Swedish embassies in Bangkok and Beijing investigating what has happened to him.

Since Beijing’s problem with the company and its book store seems to be the subject matter of some of its books (Xi Jinping’s personal life, in this case), which is plainly not a criminal or a national-security matter, the disappearance and presumed detention of the first four men is no less outrageous or illegal than that of Mr Lee, but in a climate of tension about pressure on the Hong Kong media, it is his cross-border vanishing act which has touched a particular nerve.

Some activists attribute the PRC’s increasingly frequent retrieval of its critics from beyond its borders to the coming into force in July 2015 of the new National Security Law, with its Article 33 permitting the state to “take necessary measures in accordance with law to protect the security and legitimate rights and interests of overseas Chinese citizens, organizations and institutions; and ensure the nation’s overseas interests are not threatened or encroached upon.”

But older readers may remember Wang Bingzhang, a Democracy Wall veteran and founder of the China Spring magazine, who is still serving a life sentence in the PRC imposed in 2003 on trumped-up spying and terrorism charges. Being unable to enter the PRC, Wang travelled to Vietnam in 2002 with fellow activists Zhang Qi and Wu Yue planning to meet with other labour activists. Then, according to the Chinese authorities, the three were kidnapped by a criminal gang, taken by boat across the border into China, and left tied up in a temple where the Chinese police conveniently found them shortly afterwards. So years before the National Security Law was a twinkle in anyone’s eye in Zhongnanhai, China’s police were already kidnapping people from foreign soil and prosecuting them in the PRC without bothering to develop a cover story that would fool a five-year-old. [Source]

The disappearance of Lee and his colleagues—who work for Mighty Current publishing house and associated bookstores—is likely to impact the market for salacious political books in Hong Kong, as Michael Forsythe reports for The New York Times:

Mighty Current controls an umbrella of publishing companies, some difficult to trace, that are responsible for anywhere from one-third to 60 percent of the racy Chinese political books on sale at newsstands and in bookshops, Mr. Bao and Mr. Bei said, meaning that if it were eliminated, that would greatly reduce the number of such books.

Since Mr. Gui and his colleagues have been publishing books, he has taken on Mao Zedong’s sex life and suspected corruption on the part of the former Communist Party chairman Jiang Zemin, and he put out a number of books about President Xi Jinping.

The books are sold by the thousands at Hong Kong’s airport and other locations around the city, including the company’s own store in the Causeway Bay neighborhood. They can defy credulity but are often taken as truth by mainland customers, who must return to a closed intellectual environment where open discussion of politics is replaced by rumors, giving the books added influence because any discussion of them — even rebuttals — is censored. [Source]

In November, as Lee’s four colleagues disappeared, some Hong Kong bookstores began pulling books that are banned in China from their shelves, according to a report by Oliver Chou and Christy Leung in The South China Morning Post:

When a South China Morning Post reporter posing as a customer approached Page One’s Tsim Sha Tsui store and asked for a book called The Secret Deals Between Xi Jinping and Bo Xilai, the salesman said the retailer had stopped selling banned books more than a month ago.

“We were told to take all politically sensitive books off the shelves in late November. The manager did not tell us the reason, but said Page One would no longer sell banned books ever again.”

Staff at the Kowloon Tong store and one of the airport outlets told the Post the same. [Source]

Suspicious mainland men trail BBC into Lee Bo's HK bookshop. "Their dress & behaviour are not those of tourists" pic.twitter.com/ZQjDLMn6Cu

When Beijing backs obvious lies – as in Lee Bo case – point isn't credibility; it's to flaunt power and see who will pretend to believe them