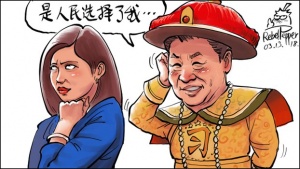 "It's the people who chose me." Liang Xiangyi emphatically rolls her eyes as reigning emperor Xi Jinping celebrates a constitutional amendment that could allow him to hold his official titles indefinitely. (Source: Rebel Pepper 变态辣椒/RFA)

Amid the annual plenary sessions of the National People’s Congress and the Chinese People’s Political Consultative Conference, collectively known as the Two Sessions (两会) and unofficially dubbed the Stupid Sessions by netizens, journalist Zhang Huijun of the California-based Chinese-language American Multimedia Television delivered a meandering, softball question about the role of state-owned enterprises in Xi Jinping’s Belt and Road Initiative project at a March 13 press conference. The question, typical of the sort that have come to be expected at the many news conferences that accompany each Two Sessions, drew a dramatic reaction from Zhang’s fellow reporter Liang Xiangyi, standing blue-clad to her immediate right in full view of the state television cameras broadcasting the event. Liang, of financial news organization Yicai Media, appeared increasingly perturbed as the long-winded question unfurled, sighing by its mid-point, then taking a good look at Zhang before frowning and executing a dramatic eye-roll. The pained reaction, which The Washington Post’s Simon Denyer described as perfectly summing up “how many journalists, and viewers, were surely feeling, not only about the question but about the whole two-week set-piece event in general,” was broadcast live on CCTV for the nation to see. Clips quickly spread across Chinese social media inspiring several viral memes: netizens reenacted the scene, and commentaries were posted. T-shirts and cell phone covers displaying Liang mid-eye-roll could reportedly be found for sale on Taobao.

Some commentators saw in the eye-roll an expression of the nation's frustration with Xi Jinping's moves, solidified at the Two Sessions, to extend his rule by amending the constitution to abolish presidential term limits. A group photo including Peking University Law School faculty all rolling their eyes circulated online. On Twitter, @lifetimeusa described the photo as "PKU Law School professors’ group 'eye-roll' photo has been quickly doing the rounds online, reflecting the fact that 'eye-rolling' is a kind of societal reaction. At this year’s Two Sessions, Xi Jinping did not hesitate to set China’s political system back 40 years in order to fulfill his own 'Chinese dream.' Rolling their eyes is all people can do."

Chinese censors acted to control discussion on social media and from news organizations. A March 13 censorship directive warned "all media personnel are prohibited from discussing the Two Sessions blue-clothed reporter incident on social media. Anything already posted must be deleted. Without exception, websites must not hype the episode." On Weibo, "blue-clothed reporter" (蓝衣记者) and "Liang Xiangyi" (梁相宜) were both temporarily blocked from search results (searches for "Zhang Huijun" (张慧君), however, displayed results). A Weibo post from Global Times chief editor Hu Xijin expressing hope that censors wouldn't too virulently attack discussion of the incident, which in his estimation were seen by most netizens as "simply amusing" and not overtly political, was itself harmonized.