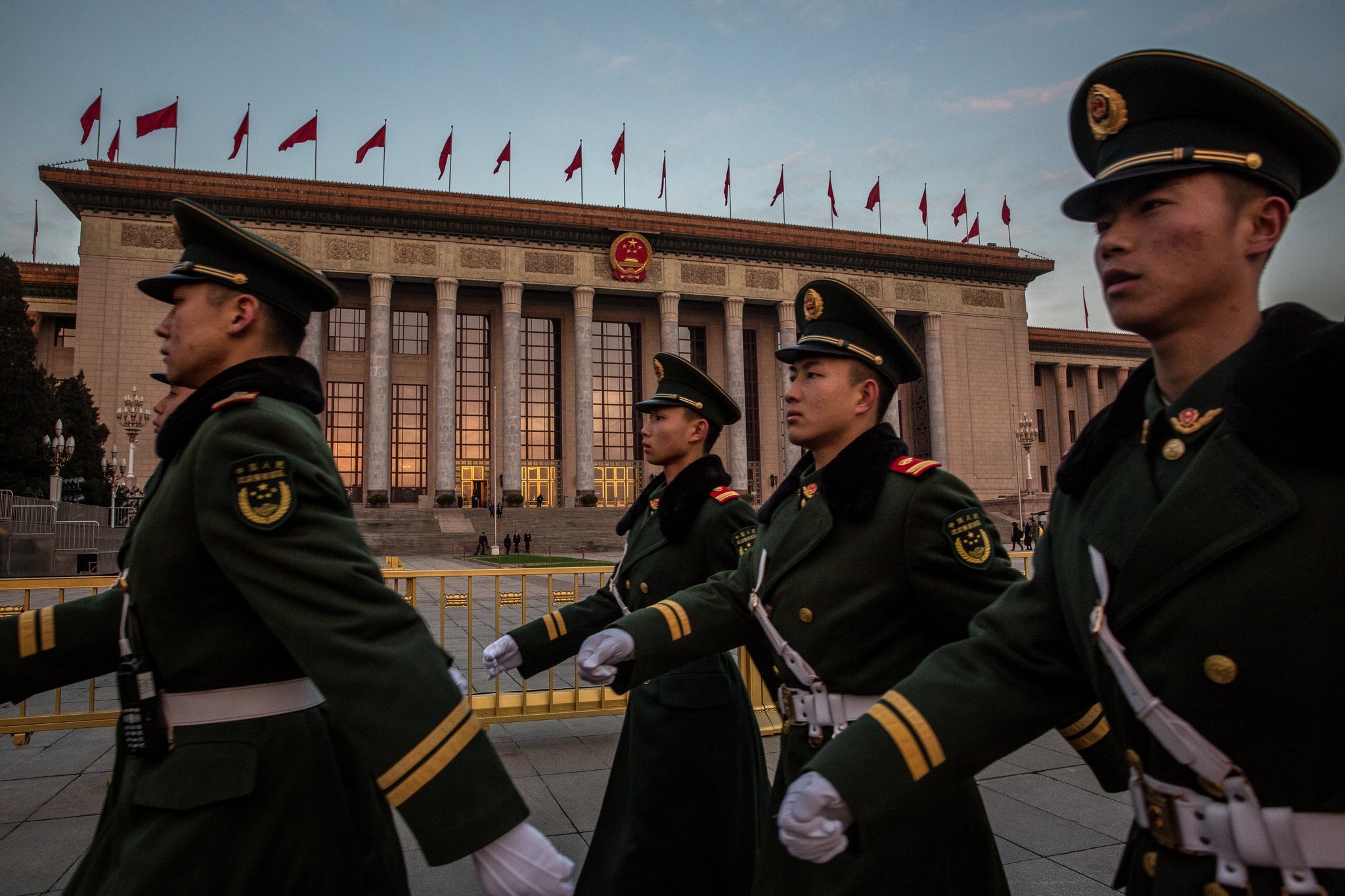 On Sunday, China’s parliament overwhelmingly approved a series of constitutional amendments that, among other changes, abolish the current two five-year term limits for the presidency and vice-presidency, a highly controversial move that allows President Xi Jinping to remain in power indefinitely and shifts the country back towards a system resembling Mao-era one-man rule.

Ben Blanchard and Christian Shepherd of Reuters report on the scene in the Great Hall of the People as the congressional vote was cast:

Reporters were briefly ushered from the main hall in the Great Hall of the People as delegates filled in their ballot papers, but allowed in to see them placing the papers, one by one, into large red ballot boxes around the room.

Xi cast his vote first, on the podium at the front of the hall, followed in turn by the other six members of the party’s elite Standing Committee, which runs China.

[…] Speaking later to reporters, Shen Chunyao, chairman of the Legislative Affairs Commission of parliament’s standing committee, dismissed concerns the move could risk a return to strongman rule or lead to political turmoil or infighting.

“As for the assumptions, conjecture and stretched situations in your question, I think that does not exist,” Shen said. [Source]

The amendment, along with another to include “Xi Jinping Thought on Socialism with Chinese Characteristics for a New Era” in the Constitution, further consolidates the Communist Party’s entrenched rule over Chinese society and politics. Chris Buckley and Steven Lee Myers report for The New York Times:

Sunday’s constitutional amendments marked a victory not just for Mr. Xi’s own ambitions, but also for his quest to entrench the Communist Party at the heart of politics, society and the economy as China ascends globally.

Mr. Xi, 64, has in effect created a new legal basis for ruling for another decade or longer as president, along with holding his other posts as Communist Party chief and military chairman. Without the amendments, he would have been forced to step down as president in 2023, weakening his control.

“Under Xi Jinping, China is making a U-turn,” Susan Shirk, the head of the 21st Century China Center at the University of California, San Diego, wrote in a recent assessment of Mr. Xi. “Personalistic rule is back.”

[…] “There’s an argument to be made that these are the most fundamental political changes to the Chinese Constitution since it was implemented in 1982,” said Ryan Mitchell, an assistant professor of law at the Chinese University of Hong Kong. [Source]

Ryan McMorrow and Joanna Chiu write for AFP about the mixed opinions Xi’s first term has generated in China:

His rise has been accompanied by tighter restrictions on civil society, with the detention of activists and lawyers, and stricter limits on the already heavily controlled internet.

At the same time, he gained a measure of popularity among Chinese people through a relentless crackdown on corruption that has punished more than a million party officials, and sidelined potential rivals.

“I think that during the past five years, he has been carrying out a soft coup, including making the Politburo a mere figurehead,” Chinese political commentator Wu Qiang told AFP, referring to the 25-member Communist Party body one level under the ruling council.

“He wants to prevent power from falling into the hands of technocrats like Jiang (Zemin) and Hu (Jintao),” Wu said, referring to Xi’s two predecessors. [Source]

It's official: China's Xi cleared to rule for life. "A historic retrogression," said Li Datong. “Throughout history, only Chinese emperors and Mao Zedong had life-long tenure till their death. And what came out of that was a disaster for the society and many painful lessons.” https://t.co/IYm5XCykvp

The decision to rewrite China’s constitution was kept secret for weeks before it was announced last month, just days before the annual legislative sessions. The official announcement was accompanied by heavy censorship of discussions online with a wide range of search terms blocked on Sina Weibo, including words such as “Disney” and “Animal Farm.” Lawyers were also warned to toe the party line and refrain from making public comments about the impending amendment. Even as the amendment was passed, there was very little public discussion allowed.

As China ushers in potentially lifelong rule for Xi, one of Weibo's top hashtags right now is whether it's okay to eat cup noodles on high-speed trains.

The blithe quality of China's censor-scrubbed internet is often jarring, but never more so than on a day like this: pic.twitter.com/gAAaDIok5f

At The New York Times, Chris Buckley looks at how Xi used a combination of stealth, speed, and guile in the months and weeks leading up to the upcoming vote to silence critics and amass support for his constitutional coup:

Mr. Xi deployed speed, secrecy and intimidation to smother potential opposition inside and outside the party. He swept past the consensus-building conventions that previous leaders used to amend the Constitution. He installed loyalists to draft and support the amendments. And he kept the whole process under the tight control of the party, allowing little debate, even internally.

[…] Mr. Xi first announced that he wanted to make constitutional changes in December, without specifying what they would be. The full details of the amendments, including the abolition of his term limit, were released to the public only eight days before the National People’s Congress convened.

[…] After the Politburo meeting in late September, he entrusted the task of revising the Constitution to just three officials: the chairman of the congress, Zhang Dejiang, and two close allies, Li Zhanshu and Wang Huning, both of whom were elevated last year into the Politburo Standing Committee, the party’s top body.

[…] “It demonstrates Xi’s penchant for rule-breaking,” said Christopher K. Johnson, an expert on Chinese elite politics at the Center for Strategic and International Studies in Washington. “It’s slowly, slowly, slowly, and then when no one’s looking, he turns around and does something big. I think it comes back to the political shock and awe that really dates back to his arrival.” [Source]

Only two delegates out of almost 3,000 voted no, and there were three abstentions. At Lawfare last week, NYU’s Jerome A. Cohen wrote about how the composition of the congressional vote would likely reveal clues about the level of opposition against the proposed constitutional amendment within the party:

Yet it has proved impossible for him to completely hide the difficulties that his bid to end term limits has encountered, even within the Party’s loyal Central Committee. China watchers will now focus on the size of the vote by which the upcoming National People’s Congress (NPC) approves the Party’s proposal to amend the Constitution. Will there be only a handful of token dissenters, just enough to give the appearance of a credible free vote and overwhelming support for Xi’s bid for unrestricted power? Or will there be one hundred or more negative votes or abstentions, as there sometimes have been for the annual reports to the NPC of the Supreme People’s Procuracy and the Supreme People’s Court in protest against blatant failures to honor the rule of law? If a significant minority of the NPC’s roughly 3,000 delegates should muster the courage to register their open disagreement, will their vote be revealed in accordance with customary practice? Or will the published result be doctored to save Xi Jinping’s face?

Experience suggests that the Chinese equivalent of intense lobbying must be under way as the NPC session unfolds, in order to assure the Party leadership’s desired outcome. Skilled Party minions have many tools for enforcing the leadership line through combinations of intimidation and persuasion. Yet, as the process of enacting a number of controversial statutes has demonstrated in recent decades, it is no longer entirely accurate to dismiss the NPC as “China’s rubber-stamp legislature.” [Source]

At Quartz, Zheping Huang looks at how Beijing is increasingly touting its authoritarian system as a model for other countries, particularly as it markets its one-party system as the ideal alternative to Western liberal democracy.

At the big annual gathering of Chinese lawmakers and political advisors that kicked off March 3, Xi said that China is offering a “new type of political party system”—a Chinese solution that contributes to the development of political parties around the world, according to state media (link in Chinese).

The Chinese Communist Party (CCP) has always said the country will never copy the political systems of other countries, in particular the Western notion of democracy. But under Xi—the most powerful Chinese leader in four decades—China’s own one-party system is one that is ready to be exported to regimes everywhere.

[…] The internationalization of China’s political system is in fact well underway. Since 2014, the Communist Party has hosted an annual summit in Beijing inviting political party leaders from around the world to hear about how it governs China. In recent years, the party has also brought young African politicians to China for training, in a bid to cultivate allies.

When asked whether China is deviating from its self-avowed policy of noninterference in other countries’ affairs, Chinese foreign minister Wang Yi said yesterday (March 8) that China will “participate more proactively” in reshaping global governance and solving international crises. [Source]

With Xi effectively dismantling collective leadership and becoming the most powerful Chinese leader since Mao Zedong, much of what the West had hoped to see China achieve in terms of political and economic reforms has failed to materialize. What the West needs to do now, argues one Economist author, is to counter China’s misbehavior using stronger policy tools:

What to do? The West has lost its bet on China, just when its own democracies are suffering a crisis of confidence. President Donald Trump saw the Chinese threat early but he conceives of it chiefly in terms of the bilateral trade deficit, which is not in itself a threat. A trade war would undermine the very norms he should be protecting and harm America’s allies just when they need unity in the face of Chinese bullying. And, however much Mr Trump protests, his promise to “Make America Great Again” smacks of a retreat into unilateralism that can only strengthen China’s hand.

Instead Mr Trump needs to recast the range of China policy. China and the West will have to learn to live with their differences. Putting up with misbehaviour today in the hope that engagement will make China better tomorrow does not make sense. The longer the West grudgingly accommodates China’s abuses, the more dangerous it will be to challenge them later. In every sphere, therefore, policy needs to be harder edged, even as the West cleaves to the values it claims are universal.

To counter China’s sharp power, Western societies should seek to shed light on links between independent foundations, even student groups, and the Chinese state. To counter China’s misuse of economic power, the West should scrutinise investments by state-owned companies and, with sensitive technologies, by Chinese companies of any kind. It should bolster institutions that defend the order it is trying to preserve. For months America has blocked the appointment of officials at the WTO. Mr Trump should demonstrate his commitment to America’s allies by reconsidering membership of the Trans-Pacific Partnership, as he has hinted. To counter China’s hard power, America needs to invest in new weapons systems and, most of all, ensure that it draws closer to its allies—who, witnessing China’s resolve, will naturally look to America. [Source]

The NPC Observer blog has translated the full text of the amendments and noted that they are almost identical to the proposed amendments released last month.