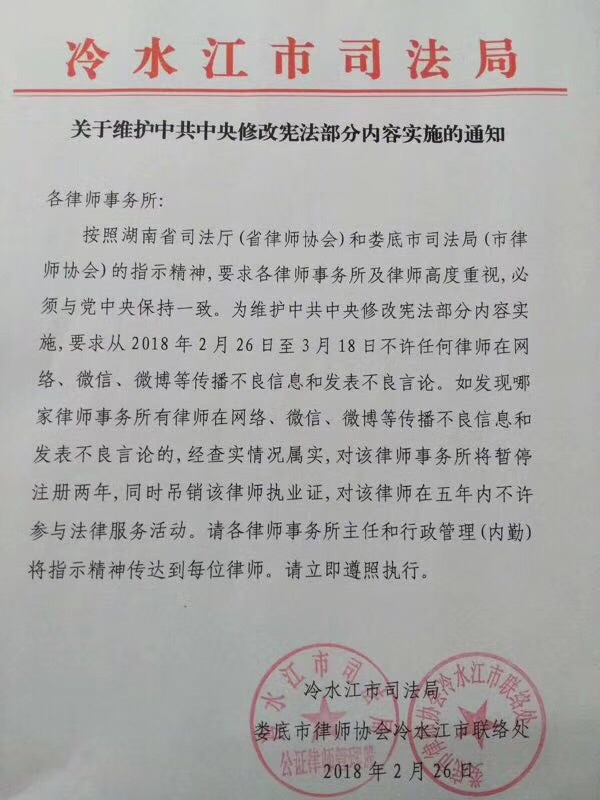 After news came last weekend of a proposed constitutional amendment that could allow Xi Jinping to retain the state presidency for life, authorities have made significant effort to stifle critical online discussion. As censors crack down on furtive social media codewords and open letters, dissent from the Chinese legal community has also been targeted. The Wall Street Journal’s Eva Dou and Te-Ping Chen report on a “particularly stern warning to lawyers in southern Hunan” that has made the rounds online, noting that legal professionals elsewhere have also been cautioned against online commentary on the controversial amendment:

The notice told law firms in the city of Lengshuijiang that they could have their licenses suspended for two years and that lawyers could be prohibited from practice for five years if they comment negatively online on the proposed change to China’s constitution.

A local lawyer said the circular on city Justice Bureau letterhead was circulated by office superiors.

A publicity official for the Hunan Justice Department didn’t confirm or deny the gist of the document, but called it a mistake by a local worker. He said that it wasn’t in the correct format for an official document from the Lengshuijiang Justice Bureau.

In Sichuan province, one lawyer said a firm supervisor warned staff against commenting about the news online.

Lawyers reached in several provinces said they had also been warned by authorities against commenting on the issue. [Source]

The purported directive has been translated in full below:

In accordance with the indicated spirit of the Hunan Province Judicial Office (provincial association of lawyers) and the Loudi Municipal Judicial Bureau (municipal association of lawyers), we request all law firms and every lawyer attach great importance to maintaining consistency with the Party Central Committee. In order to safeguard the implementation of the CCP Central Committee’s constitutional amendments, no lawyer is allowed to spread harmful information or express harmful comments on the internet, WeChat, Weibo, etc. from 2/26-3/18/2018. If it is discovered that any law firm’s lawyer spreads harmful information on the internet, WeChat, Weibo, etc, the firm will have their registration suspended for two years and the lawyer’s professional certification will simultaneously be revoked following investigation. The lawyer will not be allowed to participate in legal service activities for five years. All firm directors and administrators (internal) please convey this message to every lawyer. Please immediately implement.