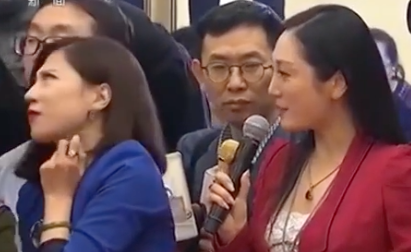 Urgent notice: all media personnel are prohibited from discussing the Two Sessions blue-clothed reporter incident on social media. Anything already posted must be deleted. Without exception, websites must not hype the episode. (March 13) [Chinese]

This directive refers to reporter Liang Xiangyi’s theatrical show of frustration at a rambling question on the regulation of capital outflow through the activities of state-owned enterprises investing in China’s Belt and Road Initiative. The eyeroll, which was broadcast live on state TV, seized the attention of both social media users and censors amid the historic constitutional amendments and sweeping bureaucratic restructuring unveiled at the annual political meetings.

The New York Times’ Paul Mozur provided background on the incident, as well as a full translation of the offending question:

With a fellow reporter’s fawning question to a Chinese official pushing past the 30-second mark, Liang Xiangyi, of the financial news site Yicai, began scoffing to herself. Then she turned to scrutinize the questioner in disbelief.

[…] Before posing her question to the government official, Xiao Yaqing, Ms. Zhang [Huijun] had introduced herself as the operating director of American Multimedia Television U.S.A., a Los Angeles-based broadcaster that has had partnerships with Chinese state-run television in the past, according to its website. Its president, Jason Quin, also lists himself on LinkedIn as the president of a Los Angeles Confucius Institute, organizations supported by Beijing that promote Chinese culture and propaganda overseas.

News outlets with such ties to the Chinese government are often chosen to ask questions of China’s rarely available political leaders at the National People’s Congress, while more mainstream local and foreign outlets are seldom called on. Neither Ms. Zhang’s employer nor Ms. Liang’s responded to a request for comment on the incident Tuesday. [Source]

Liang’s name quickly sprang to the top of FreeWeibo.com’s leaderboard of censored terms. Among the deleted posts archived by the site was one by Global Times editor Hu Xijin, who repeated the so far unconfirmed rumor that Liang had already been fired, and expressed hope that the censors would exercise restraint toward such harmlessly entertaining sideshows.

What’s on Weibo compiled a range of other reactions including, purportedly, the reporters’ own:

In screenshots of an Yicai chat group later leaked online, one colleague told Liang Xiangyi that her eye-rolling moment was broadcasted live, to which she replied: “Because the woman next to me was being an idiot.”

Screenshots of a WeChat conversation between reporter Zhang Huijun and a friend also made it online, with Zhang commenting: “What the heck was she doing looking at me like that?!”

[…] Some people from Chinese media circles spoke negatively about both reporters in their Weibo posts. Guangzhou Daily staff member Dai Bin (@戴斌) commented: “This is a serious occasion, and people have to pay attention to the time they use asking a question – after all, it’s the National People’s Congress. As for the woman who rolls her eyes, perhaps she is forgetting that she is being filmed, and forgot about her manners. May this be a lesson for her.” [Source]

Elsewhere, however, the tributes rolled in:

Amazing to see how these two ladies just exploded over Chinese social media in the span of a few hours. Fan art in the making #RedBlueCamps pic.twitter.com/s6frv2gEgW

Reposting some eye-rolling meme under this thread. Gosh I love the good sense of humor on Chinese social media. pic.twitter.com/jLpIHnyvSi

"Huijun’s sorrow is measured how? In the moment of Xiangyi’s furrowed brow." (A play on 10th Century poet-king Li Yu’s famous line, "If you ask me how much my sorrow has increased, Just see the overbrimming river flowing east.")

A battle between the red and the blue pic.twitter.com/srWxicOXbU

Beijing police jumped in to take a jab pic.twitter.com/9mVpgun7Y6

Found my cell phone cover for the spring season on Taobao pic.twitter.com/wTjgndsfDx

(The products were soon taken down.)

Uh oh… some of the trending Weibo articles are disappearing…. pic.twitter.com/NUqz7BXwIK

You listen to the red suit—the story ends, you wake up in your bed and believe whatever you want to believe. You listen to the blue suit—you stay in Wonderland, and I show you how deep the rabbit hole goes https://t.co/oiKWRnyhqv