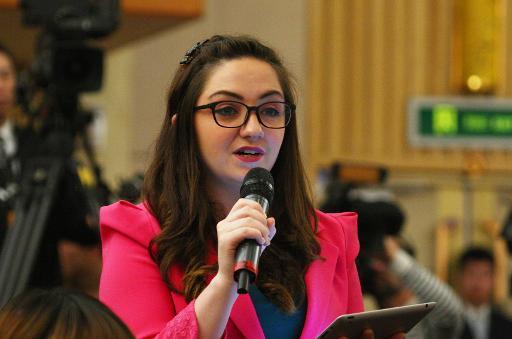 At China’s Two Sessions on Tuesday a panel of top financial regulators including People’s Bank of China Governor Zhou Xiaochuan took questions from the press. After officials fielded nine questions from Chinese journalists—eight from state media and one from private but Party-favored Phoenix Satellite TV—a lucky foreign reporter was called upon. AFP reports:

Officials at China’s rubber-stamp parliament are calling on seemingly planted foreign journalists to ask soft questions in an apparent bid to appear open to independent scrutiny, provoking grumbles after a similar controversy two years ago.

At a press conference on the sidelines of the National People’s Congress Tuesday featuring China’s central bank governor Zhou Xiaochuan and other top officials, the moderator called on Louise Kenney, who said she was a reporter from “Australia’s Global CAMG”.

Rather than address uncomfortable issues such as China’s slowing growth, vast shadow banking sector, or corruption, she asked about government policy on allowing more foreign companies to enter the country’s agricultural insurance market.

[…] Foreign reporters are rarely called on to ask questions at the annual rubber-stamp parliament, where most “press conferences” are little more than scripted exchanges between Chinese state media reporters and officials who appear well-prepared to answer their soft-hitting queries. [Source]

The Wall Street Journal notes that Ms. Kenney was jeered by foreign and Chinese journalists alike, and that her seemingly scripted query allowed another rare (and more pertinent) question from a foreign reporter:

“Foreign shill,” muttered one Chinese journalist. A person answering the phone at CAMG’s office in Beijing said he didn’t know who the Australian reporter was and could not provide contact information, though her photo graced the front of the organization’s website on Tuesday.

With the moderator seemingly on the verge of calling on another official Chinese media organization, a foreign reporter who identified himself as from the Australian Financial Review couldn’t suppress the urge to protest, shouting: “It’s the foreign media’s turn. [Don’t pick on] fake foreign media.”

The room erupted in a round of applause.  (“Nice work!” said a Chinese reporter seated nearby.)

Eventually, a combination of protests and patience finally paid off. Another foreign reporter – The Wall Street Journal’s Bob Davis –shouted out: “How about another foreign reporter?” and was rewarded with the chance to ask that burning question about whether the nation’s currency was overvalued and why the central bank had engineered a lower rate. [Source]

CAMG’s Chinese website continues to prominently display Ms. Kenney’s photo in their top stories marquee, but neither her picture nor her name can be found on the organization’s English site. A click on her likeness pulls up a story from last week about her March 6 encounter with Lou Jiwei, China’s Minister of Finance [zh] (she asked the minister about the “interesting phenomenon” of Chinese couples filing for divorce to avoid a capital gains tax on their second home). Also last week, Ms. Kenney and one of her peers were featured in a Xinhua slideshow titled “Foreign Starlets at the Two Sessions” (图片故事：明星洋妞跑“两会”). While those present at Tuesday’s press conference chose to describe Kenney as a “fake” and a “foreign shill”, Xinhua focused on the young Australian journalist’s Chinese language study and fondness for Chinese cuisine [zh].

This is not the first time a journalist from Australia’s Global CAMG Media Group has become a media star at scripted, high profile, government meetings in China. At the 18th Party Congress in 2012, a young reporter billed as CAMG’s “Andrea Yu” was allowed to pose four gentle questions to officials. Like Kenney, Yu attracted a degree of scorn from her media colleagues. Andrea Yu became an interview subject in “China’s Covert Media,” an Australian Broadcasting Corporation report by Stephen McDonell exposing CAMG’s close links to Chinese state media and its part in Beijing’s soft power drive.