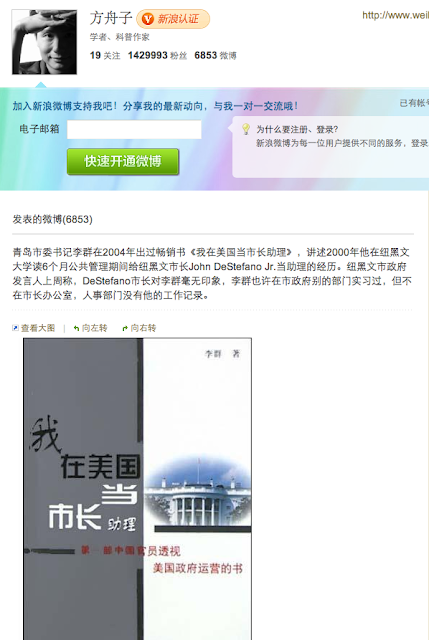 NEW HAVEN — A rising Chinese communist star who claimed to have served as an assistant to Mayor John DeStefano Jr. in 2000 was largely responsible for the torture and imprisonment of an outspoken human rights activist, according to China watchers in this country.
Li Qun, who spent six months studying public administration at the University of New Haven, returned to China and was appointed mayor of Linyi, a city of 10 million, and then the city’s Communist Party leader, according to the 2008 book, “Out of Mao’s Shadow: The Struggle for the Soul of a New China” by Philip P. Pan.

Li’s role in brutally enforcing China’s one-child policy and keeping Chen Guangcheng under isolated house arrest was noted in an article in the Nov. 28 issue of National Review, the publisher of which, Jack Fowler, lives in Milford.

“Li Qun is now a rising star in the bureaucracy (in China) and right now the deputy governor of Shandong province and apparently the heir-apparent to the governorship,” said Jing Zhang of the group Women’s Rights in China. “Without his studies in the United States, he would not have experienced such meteoric promotions.”

Zhang, who lives in Flushing, N.Y., spoke through an interpreter, a volunteer with Women’s Rights in China, Yan Xu.

Li wrote about his time in New Haven City Hall in his own book, “I Was an Assistant to an American Mayor.” According to Pan, Li “wrote that Chinese officials could learn a lot from their American counterparts about how to improve governance.”

However, DeStefano “has absolutely no recollection of Li Qun,” according to city spokesman Adam Joseph. Joseph said Li could have served as an unpaid intern in a department other than the mayor’s office, but human resources “didn’t have a record of him.” Dan Kalmanson, spokesman for UNH, said he could not verify this week whether Li attended the school.

Chen Guangcheng is a prominent member of the dissident community in China. Blind since he was a baby, Chen has been imprisoned and placed under house arrest for speaking out about abuses by the communist regime, particularly concerning the one-child policy.

The group Initiatives for China, based in Washington, D.C., has asked the U.S. State Department to bar Li from entering the United States.

“With regards to Li Qun being the main person responsible for Chen Guangcheng’s case, I am of the opinion that Li Qun is a serious violator of human rights,” wrote the group’s president, Yang Jianli, in his Oct. 17 letter.

Since he was released from prison in 2010, “Chen and his family have been kept as virtual prisoners in their home. … Chen Guangcheng and his wife were beaten up on multiple occasions for trying to leave the house or interact with neighbors. The child has not been allowed out to go to school, while almost all visitors who try to see the family are beaten or imprisoned,” Yang wrote.

Members of Initiatives for China held a rally in Washington for Chen on his 40th birthday Nov. 11. Members of Women’s Rights in China held a birthday party for him, wearing sunglasses in his honor.

“By being so notable, Chen is very high profile to the human rights community,” said John Kusumi of Cheshire, who founded the China Support Network after the Tiananmen Square massacre in 1989.

“So the continued abuse is very brazen; it is the matter of the Chinese government putting itself on the record as bent, craven, depraved, sick, twisted and contemptuous of the rule of law.”

In order to keep China’s population, now 1.3 billion, from exploding, the government in 1979 instituted a policy in which families generally are limited to one child.

As mayor of the city where Chen lived, Li Qun’s administration would be responsible for his treatment, Kusumi and Zhang said.

“The implementation of family planning in that city was especially strict,” Zhang said. “He’s very proud of his experience” in the United States.

“He learned methods to manage the economy in America and he used that same method to manage people in China,” she said. “Chen Guangcheng was arrested because he tried to expose this policy.”

Howard Wu, founder of the Laogai Research Foundation in Washington, said couples who defy the one-child policy can lose their jobs or their house. “After they’re married, they’re still not free. They have to get a permit to give birth,” he said.

The government also has forced women to have abortions and to undergo sterilization, said Wu, who served 34 years under house arrest when he lived in China.

Kusumi said that if Li did work in New Haven City Hall, he would not necessarily have learned skills he could bring to China, but “just getting acclimated to that environment” would have boosted his career.