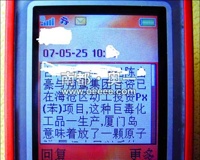 CDT reported earlier on protests against a proposed P-Xylene chemical plant in Xiamen. Xinhua has now reported that the plans have been cancelled. From IHT:

Chinese citizens alarmed about pollution won a rare victory Wednesday when a city froze a chemical project after angry residents joined hands through a flood of mobile phone text messages.

Xiamen, a port city of about 1.5 million people in the province of Fujian in eastern China, it was halting construction of a plant to make paraxylene, a petrochemical that goes into polyester and fabrics, the official Xinhua press agency reported. [Full text]

On May 29, 2007, Southern Metropolis Daily had a report titled “Millions of Xiamen Citizens Spread the Word Through SMS like Crazy, Opposing the Pollution Project” But the news was taken down from many China news portals, including sohu.com. Here is the text from Google cache.

The local authorities have tried to block news and protests over the PX plant. This photo, via Boxun, shows posters opposing the plant that were covered over by authorities.