Update: In light of the treatment of foreign reporters trying to cover the Tibet protests (see below for details), the Foreign Correspondents Club of China has issued a statement demanding access to the area.

The Age is reporting from Lanzhou, Gansu about the spreading protests, which have turned violent at times, and the subsequent crackdown, in Tibetan enclaves outside Lhasa:

Tourists and other foreigners including media were being expelled from China’s Tibetan enclaves as police and the army conducted searches of hotels and guest houses. The Chinese forces also threatened house-to-house searches for non-locals to try to prevent more violence.

Beijing has ordered monasteries to prevent monks from joining protests as it puts in place full military security forces to seal off Tibetan towns and villages from the outside world. Routes from Lanzhou into southern Gansu province, home to many Tibetan towns and monasteries, have been sealed off with police checkpoints.

In the Sichuan region of Aba, close to the Gansu border, monks in Xiahe said they had been told that at least 10 bodies were brought to the Kerti monastery after violent clashes on Sunday in which Tibetans hurled petrol bombs and set a police station and market on fire and police responded with tear gas and then live rounds. The Age could not confirm this.

The International Campaign for Tibet has posted the following map of protests that have been reported to them: 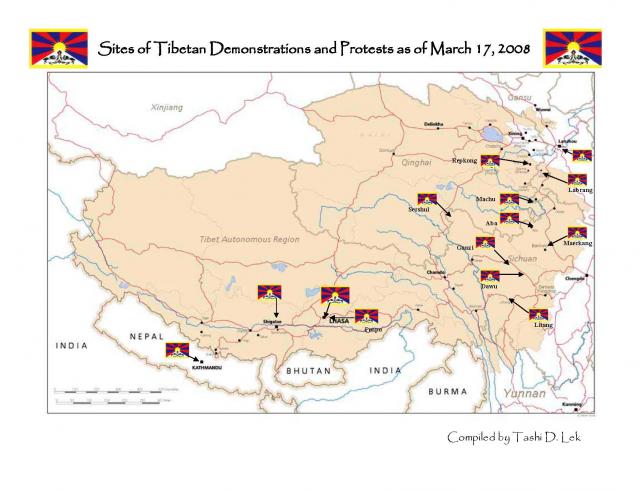 Foreign journalists who are trying to get as close to Tibet as possible are being prevented from reporting from Tibetan areas. Richard Spencer of The Telegraph writes on his blog about his experiences trying to report from Qinghai and Gansu:

Of course, there was the disadvantage that the more interesting the story, the lower the profile you had to keep.

But then last night there was a knock on the door in my hotel and two police arrived, checked my passport, took it away and photocopied it, and said I had to get out of town next morning. They said it was for my own safety, and seemed to be quite relaxed, but when I passed them this morning they were pretty sharpish out of their car to ask why I hadn’t done what I was told. Mashang – immediately – was said rather a lot.

As it happens, I was leaving anyway. But a couple of hours out of Rebkong in Qinghai, where I had been, on the way to Xiahe, where another full-scale round-up of journalists who had been valiantly holed up in local hotels was going on, my car was intercepted by police, who stuck me and my colleague into a foreign affairs office (Waiban) jeep which drove us out of the “black zone”.

There we met up with quite a club of exiled journalists.

I happen to be in Sichuan province. And I’ve been in contact with colleagues who I know are in Gansu and Qinghai provinces, all trying to get a feel for what’s going on among ethnic Tibetans.

It is not easy. We are face some measure of difficulty, trying to outsmart Chinese provincial authorities who would just as soon muzzle the foreign press at times like this.

None of us can enter Tibet, which is off limits to foreign reporters without a permit. I know of only one foreign journalist, James Miles of The Economist, who had the good fortune to be in Lhasa as events unfolded over the past few days.

An American documentary film crew also tells CNN about being sequestered in their hotel room in Xiahe. 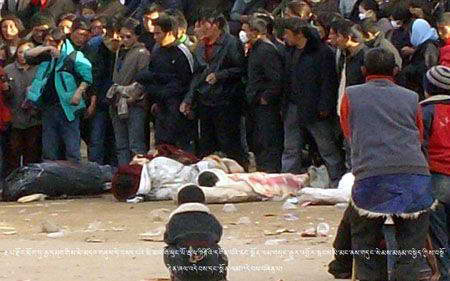 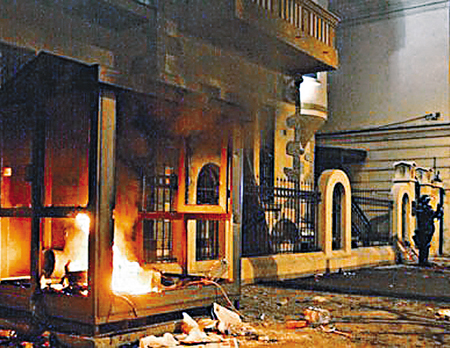 Above slideshow are soldiers in Lhasa, Xiahe and Kangding region, from Reuters, via DWNews.com.