The Island of China

The analysts at Stratfor have taken a look at China’s historic and contemporary geopolitics and, in a monograph explaining their findings, they have included this compelling theoretical map that highlights the core of China as a nation: 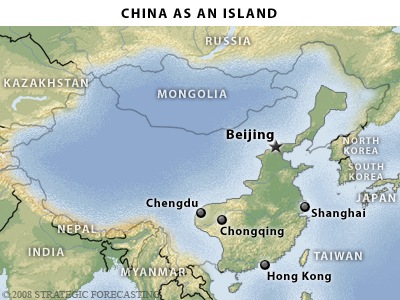 Finance blogger John Mauldin has summarized the monograph (which is not available free online). An excerpt:

Contemporary China is an island. Although it is not surrounded by water (which borders only its eastern flank), China is bordered by terrain that is difficult to traverse in virtually any direction. There are some areas that can be traversed, but to understand China we must begin by visualizing the mountains, jungles and wastelands that enclose it. This outer shell both contains and protects China.

Internally, China must be divided into two parts: The Chinese heartland and the non-Chinese buffer regions surrounding it. There is a line in China called the 15-inch isohyet. On the east side of this line more than 15 inches of rain fall each year. On the west side annual rainfall is less than that. The bulk of the Chinese population lives east and south of this line. This is Han China, the Chinese heartland. It is where the vast majority of Chinese live and the home of the ethnic Han, what the world regards as the Chinese. It is important to understand that over a billion people live in an area about half the size of the United States. . . .

A ring of non-Han regions surround this heartland — Tibet, Xinjiang province (home of the Muslim Uighurs), Inner Mongolia and Manchuria. These are the buffer regions that historically have been under Chinese rule when China was strong and have broken away when China was weak.