Esquire magazine recently published an article by Chris Jones on the new international yuppie factor in Shanghai.  Yet, the breed isn’t as stereotypical as meets the eye.  They are, as Jones illustrates, culturally savvy, ambitious, and more than temporary expat.  Jones writes about one such maverick:

In his first days in Shanghai, he thought he could help change this place, make it cleaner and fairer and better. Change has come, but it has come slowly, and while Comiskey remains an idealist, a believer in an almost quaint theory of world progress, inching forward transaction by transaction, Shanghai forced him to develop a more practical streak. He decided, instead, to let the city change him. He hasn’t joined the ranks of pirates and robber barons — the “devils with white faces,” the Chinese call them — except when he drinks in their bars just before sunrise. He is still Barrett O’Connor Comiskey, proud Irish son of New York. But in his time in this city, he has also become a new kind of American, one made in China along with everything else. 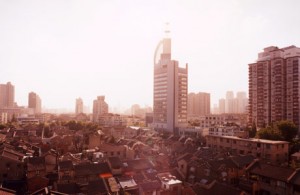 It didn’t help that Shanghai’s expatriate community is as insular as the Chinese can seem. There are the true expats, the mostly male executives whose wives shop on Nanjing Road and whose children attend posh international schools. They live in the suburbs with their maids and gardeners, drivers take them to their offices, and they pick up dinner at KFC or McDonald’s, counting off the days until they can return home to Chicago or London or Frankfurt. They are in this city but they are not part of it. They believe, This is China, and therefore I can expect nothing. Then there are those foreigners who have integrated themselves completely — in fact, they have gone over the wall and become Chinese in their hearts and minds. They in turn look down at the third brand of foreigner here, the relentless waves of plunderers who drink Coca-Cola and fumble with their chopsticks, the neocolonialists who believe, This is China, and therefore I can expect the world.

Comiskey set about working his way somewhere into the middle of everything and everyone. In his first difficult months, he wanted to feel at home in Shanghai, drawn into its irresistible currents, but he also wanted to stay true to his essential Americanism. He had to choose which parts of him he would fight to keep and which parts of him he was willing to lose. That’s how he ended up where he is today. This is China, he believes, therefore everything is possible, but nothing is easy.

See this CDT posting for a variation on the theme.