The AFP reports a speculative “radical” stimulus package to help curb the global credit crisis on China’s economy may be announced later this month. The package may also include infrastructure projects and clean energy initiatives.

As China’s economy enters an “excessive slowdown” this month, speculation about an economic stimulus package rises.

“Only a radical stimulus package can save the country from excessive slowdown,” China 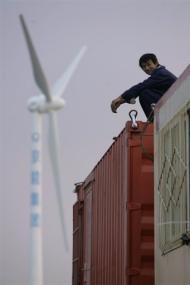 Daily quoted from a senior Cabinet official who did not want to be named.

China’s growth slowed to nine percent this last quarter, with the economy largely affected by a steep decline in exports from abroad. The recent report expresses a desire to stimulate domestic demand by encouraging bigger infrastructure projects and clean energy initiatives. The estimate for the package is reported to be somewhere around five trillion yuan (730 billion dollars).

Lebanon’s Daily Star also reports that China is looking to “reduce its dependence on capital spending, […] put in place an infrastructure of roads, power grids, ports, and railways that will serve its domestic economy for decades.”

“The Best Father’s Day Gift Ever”: a VPN