On the same day that YouTube has been blocked in China, a Xinhua report claims that a video released last week showing graphic footage reportedly of police in Tibet abusing protesters is fake. From AP:

The official Xinhua News Agency, citing an unidentified official with China’s Tibetan regional government, reported Tuesday that the video came from sources tied to the government-in-exile of the Dalai Lama, the Tibetan spiritual leader, and was pieced together from different places.

The Xinhua report said the footage purported to show a person named Tendar being beaten to death by police after a riot in Lhasa, the Tibet region’s capital, on March 14 last year. Xinhua said the person was not in fact Tendar and the wounds shown were fake.

“The Dalai Lama group is used to fabricating lies to deceive the international community and the aim of this video is to hide the truth of the March 14th riot,” Xinhua quoted the official as saying.

The government did not directly address whether YouTube had been blocked. When asked, Foreign Ministry spokesman Qin Gang told reporters: “Many people have a false impression that the Chinese government fears the Internet. In fact it is just the opposite.”

I think Mr. Qin Gang told the truth this time.

Because it has always been:

The Internet fears the Chinese government. 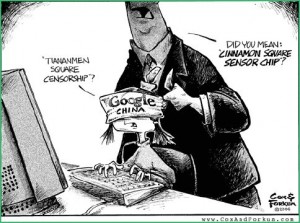 Also from the New York Times: YouTube Being Blocked in China, Google Says by Miguel Helet:

Even as China steps up its censorship efforts, the country’s Internet participation is booming. Often, critics often find a way to avoid censors and debate controversial topics.

Ai Weiwei, a prominent Chinese artist, has been using his blog on Sina.com to criticize the government’s management of the rescue and relief efforts after the devastating earthquake in May in Sichuan Province.

In recent months, Beijing has announced major crackdowns on pornographic Web sites, even citing Google and other large companies for listing the sites on their search engines. Many critics say they believe that Beijing is using the word “pornography” as a rationale to eliminate Web sites that it deems troublesome.

YouTube has been blocked for varying periods of time in several countries, including Pakistan, Thailand and Turkey. These countries often state directly why they have acted.

And from the Wall Street Journal:

YouTube, which is run on servers outside of China, is under less direct control by the Chinese government, but likely to have the entire site banned when it features content that the government doesn’t like.

Xiao Qiang, the founder of China Digital Times, a news Web site run out of the UC Berkeley Graduate School of Journalism, said the latest YouTube ban fits what appears to be a broader effort by the Chinese government since December to tighten control of the Internet.

“Part of the strategy is to block the foreign sites, and then push users to the domestic sites, which are easier to control,” said Mr. Xiao.

According to Reuters, Qin said that Internet regulation was necessary in order to prevent the spread of, ”harmful information and for national security.” He also said that China’s 300 million Internet users and 100 million blogs was proof that China’s Internet was “open enough.”

If the government has objected to YouTube’s content, it is likely that Google may cooperate in censoring it, as it does with Google Web search. In any event, here are some YouTube videos that its citizens are missing, with apologies to the ruling party:

Here’s where things get interesting: A Chinese Foreign Ministry official tells Reuters his nation is not scared of the Internet — in fact, he says, it embraces the exchange of electronic information.

“Many people have a false impression that the Chinese government fears the Internet. In fact it is just the opposite,” the official, Qin Gang, explains. “China’s Internet is open enough, but also needs to be regulated by law in order to prevent the spread of harmful information and for national security.” 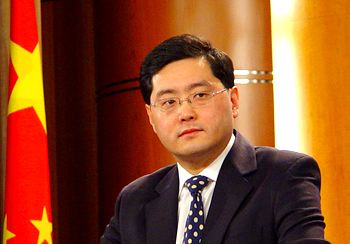 That second sentence — you know, the one that contradicts the statement before it — is key here. While China maintains appearances of being OK with an “open enough” network, “open enough” really means not open at all. The country’s government has blocked YouTube multiple times before. As recently as March, access to the site mysteriously vanished amid riots in Tibet, which just happened to be videotaped and uploaded prior to the blocking.

China’s put the kibosh on countless other sites over the years, including Wikipedia, Flickr, and Google News. Then there was that little promise it made prior to last year’s Olympics: Read my lips. No Internet blocking. (For foreign journalists, anyway.) We saw how long that pledge lasted.

The country’s cracked down on iTunes and Amazon, told GoDaddy to go away, and said no to The New York Times, citing nonexistent “technical problems” for the troubles. Heck, the government even kept power-blogger Robert Scoble from doing his thang within the People’s Republic. So what’s the deal?