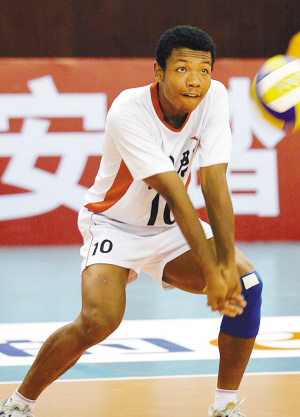 Ding Hui, who is affectionately nicknamed Xiao Hei, or Little Black, by his team mates, was included in the national team’s new 18-man training squad.

The son of a South African father and a Chinese mother, Ding is expected to play a key role in China’s push for gold at the London Olympics in 2012.

However, despite the fact that he was born in China and only speaks Mandarin and his city’s local dialect, his elevation has stirred up some racial prejudices among his countrymen.

[…] Mr Ding told the Shanghai Wenhui newspaper that “people seem to care more about my heritage and appearance, but all I want to do is to play good volleyball”. [Photo via Sohu]