The BBC reports that flaws in compulsory government software are vulnerable to hackers: 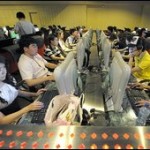 The potential faults were brought to light by Chinese computer experts who said the flaw could lead to a “large-scale disaster”.

The Chinese government has mandated that all computers in the country must have the screening software installed… The Chinese government said that the Green Dam Youth Escort software, as it is known, was intended to push forward the “healthy development of the internet” and “effectively manage harmful material for the public and prevent it from being spread.”

“We found a series of software flaws,” explained Isaac Mao, a blogger and social entrepreneur in China, as well as a research fellow at Harvard University’s Berkman Center for Internet and Society… Mr Mao told BBC News that this could allow hackers to “steal people’s private information” or “place malicious script” on computers in the network to “affect [a] large scale disaster.”

See past CDT posts about the new software requirements.

With A Whimper And Not A Bang