Eight Chinese nationals were killed during the earthquake that struck Haiti, including four members of a UN peace keeping mission: 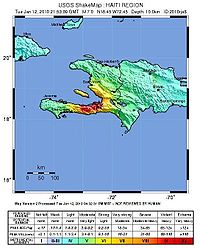 Xinhua said four of the victims were part of the UN peacekeeping mission in Haiti and the other four were members of a team sent to Port-au-Prince by the public security ministry for “peacekeeping consultations.”

The team had just arrived in Haiti and was meeting UN officials when the quake struck, the report said. China’s foreign ministry spokeswoman Jiang Yu said on Thursday that all other Chinese in Haiti were safe, including more than 130 UN peacekeepers.

“The bodies of the eight dead comrades will be repatriated back to China as soon as possible,” the ministry said.

China has sent 50 Chinese rescue personnel and a load of relief supplies to Haiti amid mounting fears for the thousands still trapped under the ruins.

China in Africa: A “New Colonialism”?

China in Africa Round-up 07.17: Genocide By Proxy, Colonization Denied, and Anger Over Ivory