China Intensifies a Tug of War With India Over Nepal 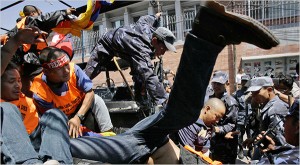 For years, Nepal never bothered too much with policing its northern border with China. The Himalayas seemed a formidable enough barrier, and Nepal’s political and economic attention was oriented south toward India. If Nepal was a mouse trapped between elephants, as the local saying went, the elephant that mattered most was India… As Nepal’s home minister, Bhim Rawal, met with China’s top security officials, Chinese state media reported that the two countries had agreed to cooperate on border security, while Nepal restated its commitment to preventing any “anti-China” events on its side of the border.

Details of the meetings were not yet known, but the two countries were expected to finalize a program under which China would provide money, training and logistical support to help Nepal expand police checkpoints in isolated regions of its northern border.

The reason for the deal is simple: Tibet… If it once regarded Nepal with intermittent interest, China is now exerting itself more broadly toward its small Himalayan neighbor, analysts say — partly because of its concern that Nepal could become a locus of Tibetan agitation, partly as another South Asian stage in its growing soft-power fencing match in the region with India.