Inflation May Spur Revaluing of Yuan 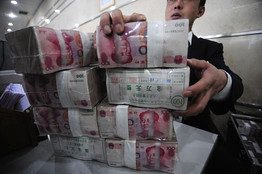 Economists and politicians from Brussels to Washington say that the Chinese yuan is undervalued. For China’s own good and that of the global economy, they say, the currency needs to move up in a big way, and soon.

So why hasn’t China revalued? Part of the answer is Japan…From Japan’s example, Chinese thinkers learned that a big exchange-rate move could damage their economy, and won’t necessarily help the trade balance.

Most Chinese economists say they think their nation’s large trade surplus is best addressed with domestic policies to lower high savings rates. “To only focus on the exchange rate is the wrong approach. You have to look at fundamentals,” said Yao Yang, an economist at the China Center for Economic Research in Beijing. “It will kill China’s economy if you appreciate the renminbi by 20% in one month.”

The costs to China of a big exchange-rate move would be immediate and concrete: export factories whose goods suddenly got too expensive would close, idling workers. Yet the benefits that proponents say come from yuan appreciation are diffuse and abstract: chiefly, a more “balanced” global economy.

Yuan Gets More Room to Float

Internationalization of the RMB by 2040?

"Washingtonomics" and the Irrational American Buyer

U.S. and China Agree to a Process to Analyze Risks in Economies Worldwide