While elections in China exist at the village level, they are rare at the township level and above. Currently, Nanjing is the only city with direct elections of grassroots officials on a large scale. China Newsweek reports on “democracy’s new evolution.” Translated by CDT: 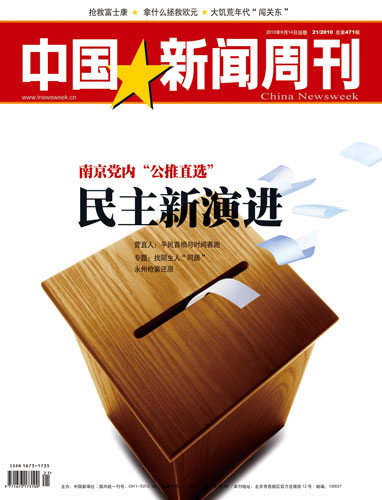 The new century ushered a landmark democratic innovation, “public recommendation and direct election,” into the Chinese Communist Party. The Communist Party’s democracy experiment now nears its tenth year, starting with the initial implementation of “public recommendation and direct election” in Sichuan’s Pingchang County — the first break with the Party’s “appointment system” — and lasting till today.

According to Samuel Huntington, political order and stability depend on the relationship between the level of political institutionalization and the degree of political participation.

In ten years, it was the first such experiment in the country, and its “public recommendation and direct election” would later receive the full affirmation of the 17th National People’s Congress as the Communist Party’s goal for democratic governance. Today, Nanjing alone, already with 806 village party organizations and 363 city community organizations, has implemented public recommendation and direct elections.

In Nanjing, one of the most important cities in the lower reaches of the Yangtze, grassroots party organizations have already received democracy’s “full coverage.” Democracy, in this [provincial] capital of 7.58 million, is on the brink of evolving towards a major trend. Because of a few differences in the Party’s democracy experiments in the past, Nanjing’s experiment will provide China’s evolving democracy with a brand new urban sample. This city’s efforts may advance China’s broader democracy by providing ideas.