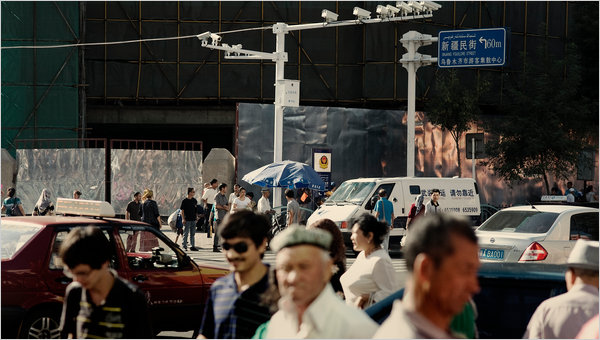 Roughly a year ago, Urumqi’s ethnic Han and Uighur populations took part in the worst ethnic rioting in modern Chinese history, killing at least 197 people… Now at least 47,000 cameras scan Urumqi to ensure there are no more surprises. By year’s end, the state news media says, there will be 60,000.

Video surveillance is hardly uncommon in the West. But nowhere else is it growing as explosively as in China, where seven million cameras already watch streets, hotel lobbies, businesses and even mosques and monasteries — and where experts predict an additional 15 million cameras will sprout by 2014.

Much of the proliferation is driven by the same rationales as in Western nations: police forces stretched thin, rising crime, mushrooming traffic jams and the bureaucratic overkill that attends any mention of terrorism.

But China also has another overriding concern — controlling social order and monitoring dissent. And some human-rights advocates say they fear that the melding of ever improving digital technologies and the absence of legal restraints on surveillance raise the prospect of genuinely Orwellian control over society.

How Technology Became a “Trap” in Xinjiang