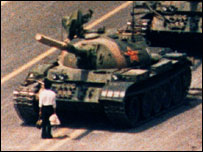 The World Press Photo foundation celebrates the 50th anniversary of its annual photographic competition this year.

In the last of five pieces by photographers talking about their award-winning work, Charlie Cole describes how he captured the dramatic 1989 photo of a protester confronting a line of People’s Liberation Army tanks in Tiananmen Square, Beijing, during demonstrations for democratic reform.

No one knows for sure what happened to the “man with the shopping bag” after he was hauled away by China’s secret police, but the event provoked an international outcry.

Thanks to Michael Rank for the link.