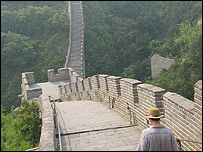 In the space of about a decade, China’s tech development has raced ahead to catch up with some of the most advanced countries in the West. But there are still stark differences, finds Richard Taylor.

With a rapidly expanding online population, it is tempting to see China as hurtling full speed towards digital nirvana, but all is not quite what it seems.

Somewhere along the way the idea that the Chinese people should be allowed to inform and be informed appears to have been lost.