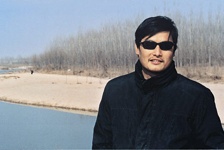 A Chinese court jailed a blind human rights campaigner for four years and three months on Thursday, state media announced, prompting other activists to warn of a clampdown on China’s “rights defenders.”

Documents about Chen’s case (in Chinese) are available on the blog of his defense lawyer, Xu Zhiyong. See also a comment on the sentencing from the Chinese Law Prof blog and TIME 100: The People Who Shape Our World –Chen Guangcheng: A Blind Man with Legal Vision by Hannah Beech.

If further proof of the complicity of the central authorities in Chen’s case were needed, try searching for his name (ÈôàÂÖâËØö) on Baidu (www.baidu.com): you get no results, along with a helpful message telling you that your keywords “may have content not in accordance with relevant laws and regulations” (ÊÇ®ËæìÂÖ•ÁöÑÂÖ≥ÈîÆËØçÂèØËÉΩÊ∂âÂèä‰∏çÁ¨¶ÂêàÁõ∏ÂÖ≥Ê≥ïÂæãÊ≥ïËßÑÁöÑÂÜÖÂÆπ). Interestingly, the results for both Google.cn and Google.com are very similar (they are headed by a nasty – and of course anonymous – character assassination which starts with the claim that because Chen is blind, he hasn’t seen the great changes taking place in China!). 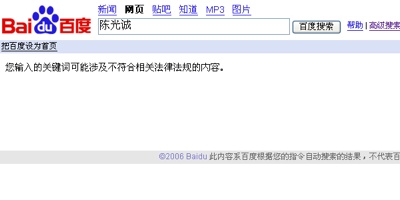