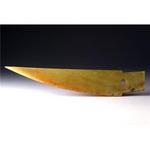 Jade prospectors are putting one of China’s rivers in peril and could soon exhaust supplies of the precious stone.

In 2004, jade hunters using heavy equipment wrecked the ruins of an ancient civilisation dating back as far as the Han Dynasty, which began in 206 BC on the west bank of the Yurungkax river. [Full Text]

Wang Shiqi, deputy director of Peking University’s Gemstone Appraisal Centre, said deposits of Khotan, or Hotan, jade would be depleted in five or six years if the government did not stop the indiscriminate use of heavy excavation machinery along Xinjiang’s Yurungkax River, the main source of the stone.

The jade is considered to be the highest quality because of its pure texture and tallow-like lustre, and has been associated with emperors throughout Chinese history.

Khotan jade can sell for up to 1,000 yuan a gram (about 100 euros or 120 dollars US), and prices have rocketed in recent years because of a sharp decrease in output.

Translation: “What Can an Ordinary Person Do About the Xinjiang Crisis?”