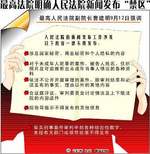 Amid the recent swirling news tightening waves, some more discipline with the judicial system, from Xinhua net via Sina.com, translated by CDT:

Some embargoed items, quite arbitrary in case of ambiguity, include: contents related to state secrets, commercial secrets and privacy; names, addresses, photos and other identifiable materials of defendants in juvenile crime cases; all contents relevant to non-opened trials and cases, except for verdicts and facts that ought to be publicized; discussions within trial committees and internal correspondence flowing through different levels of courts; AND (more importantly) all other information that court leaders deem not publishable. [Full Text in Chinese]

And more on strict spokesperson rule and keeping a single voice:

The same day, Supreme Court President Xiao Yang also highlighted the enforcement of the judiciary’s spokesperson channel, advising against other court employees accepting interview requests without approval from spokesperson’s offices. Major events should be handled in a uniform manner by the spokesperson in the court, and speak to reporters, Xiao said.

Xiao also stressed the importance of a unified voice throughout the court system. Individual cases are supposed to be published by local courts of jurisdiction, but major, special or national cases should be handled by the supreme court.

Before high courts, in provinces, publish major events, Xiao noted, the content and angle of the news ought to be reported to the supreme court first.