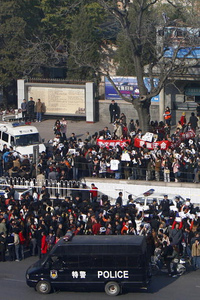 Stayed tuned ahead for Beijing’s war on dogs, and rabies, from Shanghai Daily:

A campaign will begin on Thursday to check that Beijing’s citizens have licenses for their dogs, do not have more than one dog per household and are not illicitly operating pet businesses in China’s capital, local police have announced.

The city will implement a “one dog” policy for each household in nine major management zones, aimed at fighting rabies which claimed 318 lives nationwide in September. [Full Text]

– Also see BBC News’ Beijing dog policy sparks protest
– And the Chinese story via Wenxuecity with many photos of a probably frist-time middle-class protest, over Beijing’s dog policy, in many years